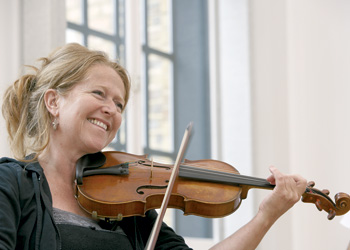 As always, the Philharmonic has a fantastic programme in store for the festive season, culminating in the time-honoured New Year Concert, which will start 2010 with a decidedly elegant bang.

We chatted with Jacqueline Shave, the leader of the Britten Sinfonia, the celebrated ensemble from Cambridge that’s formed an enduring partnership with the Philharmonic, beginning in 2007.

Founded in 1992, the Britten Sinfonia is regarded as one of the UK’s most versatile chamber orchestras. Championing music from such diverse figures as Henryk Górecki and Frank Zappa, the ensemble has extensive tours of Europe and South America under its belt, yet it’s an entirely not-for-profit enterprise. As their mission statement proclaims: “We aim to appeal to diverse cultural groups both through the work we present and the way we present it.”

Music aficionados can catch the ensemble on Sunday 13th, when the Cambridge comets will be performing a series of splendours by Bach, Birtwistle, de Machaut, Christian Mason and Ockegham.

Jacqueline Shave: Krakow is a beautiful and perfect place to have a relationship with as we have close associations with Cambridge – a rich cultural university city also with extraordinary architecture.

KP: Goethe once described architecture as “frozen music”. If that is so, which composer do you feel would best express the genius loci of Krakow? Likewise Cambridge, your home city…

JS: Krakow seems to be an exquisitely preserved Baroque fantasy. I associate it with Christmas and snow and twinkly lights. It’s like going back in time – however the feel for me is romantic – so Chopin, Liszt…. Wet pavements, raincoats, streetlights, rendezvous…. For Cambridge it’s the quintessentially English Thomas Talllis and the Chapel tradition of choral music.

KP: Britten Sinfonia plays a wide variety of composers. On the Polish front, you performed Lutosławski earlier this summer at the Royal Albert Hall. Do you have plans for further forays into Polish music?

JS: We have previously performed works by Górecki, Penderecki and Panufnik. We are currently considering a new work by Paweł Myketyn.

KP: You made headlines when the Britten Sinfonia began, when you included Frank Zappa in your repertoire. Do you feel that classical music needs to shake off a perceived “stuffy” image?

JS: I think things have already changed in that area – the whole spectrum of music is so accessible via downloads and film use and advertising. I remember the film Amadeus playing a big part in awakening people to Mozart who may never have otherwise heard his music. Britten Sinfonia played at the Latitude pop festival in the UK this year and the response was overwhelming and direct from this non-classical audience.

KP: You have collaborated with such diverse acts as Efterklang and Nico Muhly. What other innovative artists would you especially like to collaborate with?

JS: I have just started working on an improvisation project with tabla player, Kuljit Bhamra – and he has been involved with Britten Sinfonia on the Moondog project. I have always wanted to work with David Bowie. His voice is an inspiration.

KP: We hope that you have had a chance to see a bit of Krakow and its environs in between your performances. Several international ensembles have played in the Wieliczka salt mines, likewise the Royal Castle. Are there any venues that you would especially like to play in Poland one day?

JS: I have never been to Warsaw so I would like to play there and feel the atmosphere of the city. I very much enjoyed giving a concert at Oskar Schindler’s factory in Krakow a few years ago – I would love to play there again.

Find out more at www.brittensinfonia.com.

Britten Sinfonia will perform at the Philharmonic Hall, ul. Zwierzyniecka 1 at noon on Sunday, 13 December.