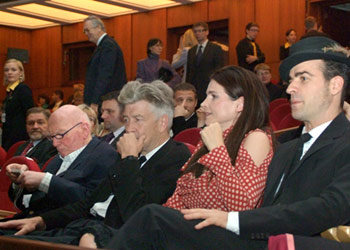 The Krakow Post was in Łódź on 23 November when film director David Lynch outlined his plans for a major new film studio that’s set to emerge in the city over the next two years.

The project has been brewing for some time now, owing to the director’s long-standing love affair with the city. Lynch made his surreal 2006 thriller Inland Empire in Łódź, and he has enduring ties with the city’s film school. Last month’s conference seems to have set the seal on the ambitious project, which has financial backing from the city fathers.

Speaking to journalists prior to this month’s Plus Camerimage Festival, the director described the extensive enterprise, which will include a film studio, a post production studio, a gallery, a restaurant and a bar. The complex will be located in the former EC1 power plant, including a permanent office for the Camerimage Festival.

Never one to do things in a typical Hollywood fashion, the director of Eraserhead and Blue Velvet told the Post that the studio “will be a place of creativity and inspiration for whoever wants to come, be they furniture-makers, welders, dancers, or members of the theatre.”