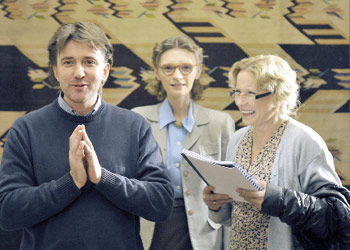 “The Brits are coming!” So uttered a jubilant Colin Welland on collecting his Oscar for Chariots of Fire, way back in 1981. As with so many acceptance speeches, the gift of hindsight gives us a crucial sense of proportion. The renaissance in British film that was “to make folks sit up and notice”, to ransack a quote from Chariots, never did come. Throughout the eighties, Britain was predominantly associated with the “Laura Ashley School of Film-making” (for which Chariots itself was partly responsible), few examples of which raised critics eyebrows.

Meanwhile, over in Poland, cinema has been in the throes of a seemingly eternal crisis since 1989, causing much soul-searching and beating of brows. The irony has not been lost. For years, directors had fought a battle with the censors, ultimately creating a school of film that commanded respect across the globe. And yet, with the coming of freedom in 1989, things had gone awry. Funding dried up and directors struggled to find a distinctive voice. There have been exceptions, such as the brilliant Dorota Kedzierzawska. But it was not until the Gdynia Festival this summer that a real buzz started to take hold, when a crop of new films – many by first-time directors – won over the critics.

“I would say that we had already noticed the beginnings of the end of the crisis in the film schools a few years ago,” says Bogusław Zmudzinski, director of Krakow’s Etiuda & Anima Festival, “and now this is being confirmed in the professional circuit.”

Given the surge of enthusiasm surrounding this year’s fruits, many in the industry are nervous about being too optimistic about a new dawn for Polish cinema, not least Borys Lankosz, whose debut feature Rewers (Reverse) swept the board at Gdynia this summer.

Lankosz, a 36-year-old born and bred in Krakow, has delivered a sparkling addition to the canon of Polish cinema. Reverse takes a novel approach to an unremittingly bleak time – the era of Stalinist oppression (1948-56). The film tells the tale of Sabina (Agata Buzek), a 30-year-old woman who is struggling to find a husband in down-at-heel Warsaw. She lives with her mother and grandmother – two flamboyant incarnations of the Varsovian intelligentsia – played with verve by celebrated actresses Krystyna Janda and Anna Polony. Whilst the elder ladies’ match-making schemes prove somewhat disastrous, the family then finds they’ve got more than they’d bargained for when a dapper young chap finally does win Sabina’s heart.

The film has been billed in the press as a black comedy, but perhaps the tag is a little misleading: “Reverse is hard to pigeon-hole as belonging to a specific genre,” says Lankosz, “and this is intentionally so”.

Gracefully shot by Marcin Koszałka, and with a superlative script by Andrzej Bart, the film has already been selected as Poland’s candidate for the upcoming Oscars. Whether or not Lankosz makes the final round, and whether it’s imprudent to declare now that “the Poles are coming”, remains to be seen. However, Reverse is a debut that’s fully worth celebrating.

The Krakow Post managed to hook up with Lankosz after an early screening at Pod Baranami last month, and the director shared his thoughts on what’s proved to be the cinematic sensation of the year.

Krakow Post: You’re from a different generation to the one which lived though the turbulent events of the film. Do you feel that this gave you a healthy sense of detachment?

Borys Lankosz: I never thought in those terms. No, no, no. I just had this wonderful script. And I just wanted to tell the story. Sometimes I say that I feel like the guy on the island who has a message in a bottle, and he throws the bottle into the ocean. I had no idea of the viewer. How can you possibly know who will see your film? What I was trying to achieve was to tell a story which I thought was great, and to tell it as well as possible.

KP: What was the actual genesis of this project?

BL: Well, Andrzej Bart is a great writer – one of the best. Sometimes he’s compared to Thomas Pynchon. For a long time, a lot of people thought that this was just the pseudonym of someone very important. No one really knew who he was, because he was very hidden. I met him eight years ago. We tried to do a film together about the Litzmannstadt Ghetto (the Łódź Ghetto). It was to be a feature. But it never happened, because the producer sucked. But thanks to that producer, we met. So it was not completely fruitless. And then we decided to make a documentary about the subject, and we were working together for about five years. So we really got close – we’re friends now. And when Jerzy Kapuściński, the new director of KADR, the legendary film studio, told me that he wanted to produce my first feature, it was obvious to call Andrzej and ask him to write the script for me. I had only one request: I wanted to have a story about women.

KP: So at that point you didn’t have a definite motivation to set the story during Stalinism, or the Second World War for example?

BL: No, not at all. And then it was great, because at that very same moment he had an idea. Because he’d written this wonderful book – Rien ne va plus – which had won the Kościelski Prize, (which is referred to as the Polish Nobel prize for literature). It was his first book. It’s a fantastic story. It follows 200 years of Polish history from the perspective of a portrait which has a consciousness. It travels from hand to hand over two centuries. And over three pages of this book was a character called Bożena. And Bożena was under the very same kind of pressure that Sabina is in Rewers. But that was 20 years ago. Andrzej was a younger man when he wrote it. And he had originally decided that she would commit suicide. He told me that in the book, he had created about 60 characters, and he only remembered Bożena. But he felt that his decision to make her commit suicide was not such a good idea. It was too easy. He remembered that character, and he wanted to give her a second chance. So when I said to him that I wanted to make a film about women, he decided to give her another life – although he gave her a new name, as he was sure she was Sabina!

KP: Of course, in Polish culture, women are very strong. What was the overriding inspiration for focusing on them?

BL: I agree with what you say. First of all, it comes from my belief that women are – I don’t want you guys to think that I’m a smooth operator or something – but I think that women are wiser than guys. Especially when I look at the older generation. It seems as if women learn more in their lifetime – they understood more about the world – about each other. And they develop strong characters.

BL: Not only in Poland. Besides, I’ve always really liked films about women. Like A Woman Under the Influence, by John Cassavetes. So I’ve got under the influence of women. And I think it’s something absolutely fascinating watching women under the influence of evil. What we’ve got here in Rewers is the situation of three generations of the Polish intelligentsia, in the middle of this horrible, Stalinist night – probably the worst time ever for the intelligentsia – and they try to build a tiny oasis of safety. And then suddenly, evil comes in. And it’s fascinating to watch how they try to handle this.

KP: Were there any echoes of your own family’s experience in the film? The world of the intelligentsia?

BL: I did grow up in the atmosphere of the Cracovian intelligentsia. But that means something different, because there was never an uprising here in Krakow. We don’t have this ethos. It went a completely different way. So it was fascinating to be so close to this in Warsaw, where I live now. At the moment I live in a building – and there are not many such buildings left in Warsaw – from 1925. I can actually see the bullet-holes in the wall. It’s amazing – it’s still there. It’s the genius loci – you can still feel it in the air.

KP: The film evokes some complex historical issues, yet it has been selected as Poland’s candidate for the Academy Awards. Do you think that the focus on the women will make it accessible to Western audiences?

BL: You tell me! I hope so. We’ve already had the first screening in L.A. for Academy members. I wasn’t there, but I got reports from the PR agency which runs it, and they told me that the reactions were very similar to those of Polish audiences. Actually, I think that this story is pretty universal. It could happen in any totalitarian state – in any police state. I made a documentary in Iran two years ago. I had great researchers, and I spent a really intense time there. And somehow, I feel, for example, that this story could have happened in Iran as well.

Besides, I used genres that are very well known in America, like film noir, black comedy. So I believe that people will understand it outside of Poland.

KP: For many years, people have been talking about the crisis for Polish film-makers since 1989. But since the Gdynia Film Festival in September, a lot of people in the film world have been saying that maybe there’s a change of direction underway. What do you think is the most important guideline for aspiring Polish directors?

BL: The most important thing in all matters is to be honest with yourself. And I think I had a lot of luck. I had a great producer who was supporting me, and I felt secure, so that was very important.

I always had this strange experience when I wanted to go to the cinema to see a Polish movie. I was disappointed so many times that I didn’t want to feel that again. It was a horrible feeling. This year was the first time that I’d been in Gdynia – I’d never been to the festival before. And I must say, many films there were really excellent. So something happened. Something started. Something is changing. And I’m even afraid of talking about it, because it’s like a little, tiny green leaf. But I hope that something is going in the right direction.