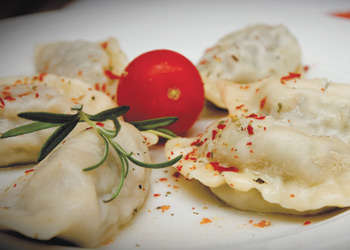 Yes, Christmas is coming, and with it the task that strikes fear into the hearts of many Polish women: making pierogi. These little parcels of joy are a pretty ubiquitous feature on the Polish Christmas table and usually disappear before you can say smacznego. Not only are they time-consuming to make, but practice makes perfect, so in a world where housewives don’t have the time or energy (or the servants), making pierogi at home is a dying art. Despite this, the Polish love of pierogi prevails and they remain a staple of the national menu. So whether it’s before, during, or after Christmas, it’s no surprise that there is no shortage of places in Krakow to get your fill. It’s just a shame that so many of these places are so dire.

You’d think that making pierogi couldn’t be that complicated, and in one sense you’d be right. The pastry is simply flour, water, butter, salt and egg and for me, it’s the pastry that makes or breaks pierogi. It has to be pale, thin and smooth, not fluffy, clumpy or yellow. More than one person I spoke to when researching this article told me that the secret to success is that the water added to the flour must be hot (it helps to gelatinise the starch in the flour and makes for a firmer and more elastic dough). The filling can be whatever you like that will stand up to a few minutes of boiling. The most popular combinations are meat (usually the leftover brisket from the rosół [broth] that was made earlier in the week), Ruskie, which are cheese and potato (in proportions of 30:70 for all you brave souls who want to try this at home), and cabbage and mushroom, although I’ve heard of pierogi with black pudding and ginger or with lentils. They’re not just a savoury pleasure, as in summer and autumn we also find fruit pierogi served with cream and sugar.

The problem with going out for pierogi in Krakow is that only a few restaurants in the city make their own from scratch. Most buy frozen, pre-prepared products from one of the large manufacturers and simply toss them into boiling water or onto a hot frying pan and serve them up to unsuspecting customers. The truly disgusting deep-fry them (Babcia Malina, yes I’m talking about you. You really should know better at your age…). It’s not just laziness though, the local health inspectors’ (Sanepid) requirements for commercial kitchens stop many would-be restaurateurs in their tracks. For example, a full-service restaurant kitchen needs separate rooms (yes, you read that right) for washing eggs and vegetables. All in all, it means that opening a “proper” restaurant, one where all the food is cooked from scratch, becomes an expensive business and it’s not surprising that many opt to use pre-prepared products that just have to be heated up.

So it was no surprise to find that two of the places where I regularly get my pierogi fill, Nostalgia on ul. Karmelicka (weekends) and Pod Aniołami on ul. Grodzka (with special visitors), both make their own.

I spoke to Łukasz Nowak, Head Chef at Nostalgia, about how they consistently turn out the most delicious, light and tasty Ruskie, spinach (my favourite) and their seasonal cabbage and mushroom or veal and sage butter pierogi. First of all, he says that they stick to tradition. Some people do strange things to their pastry; add hard boiled, grated egg yolks, or too many eggs (which makes the pastry very firm, like Italian pasta), or leave out the eggs altogether. What also helps, he told me, is that they make around 200 pierogi a day, so they know immediately when something’s not right.

Marcin Norek, Head Chef at Pod Aniołami, has a similar approach. He learned to make pierogi at catering school and when he joined the team at Pod Aniołami seven years ago, they decided to develop their own pastry recipe. It took around 30 batches before they got it right, but now they think it’s perfect. Chef Norek and his team usually make around 300 pierogi a day, with the female chefs making the pastry (they’re more dextrous he says) and the male chefs in charge of filling. At Christmas and Easter, this can go up to 500-600 pierogi a day, so they get lots of practice. They make the filling 12 hours ahead of time so that the flavours have time to mingle, then boil the pierogi before frying them in clarified butter and finely chopped onions. Their Ruskie pierogi are unlike any others I’ve tried before: buttery, caramelised on the outside with a soft, savoury and slightly peppery filling. Delicious. And now that I know they also make them to take away, their next appearance will most probably be on my Christmas table.