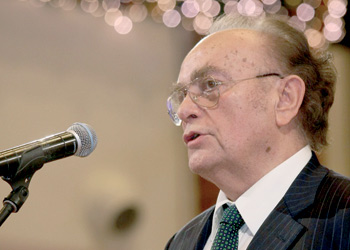 Sandor Demjan – the richest man in Hungary – is an investor and philanthropist. The Krakow Post asked about the secrets of the success of this truly “self-made man” and his plans for future investments.

Sandor Demjan, born in 1943 in Romania, is the president of TriGranit Development Co., Polus Investments Limited, and the National Society of Entrepreneurs and Employers in Hungary. As a seven-year-old child, Sandor was placed with foster parents because his widowed mother couldn’t support the family, and the difficult childhood made Demjan tough and independent. In 1980 he was awarded a TIME Man of the Year prize for being the most successful man in the communist region, and 16 other prizes for his business and charity activities.

Krakow Post: Mr. Demjan, how did a young man without a name, as you were years ago, become the tycoon you are today?

Sandor Demjan: Back then in communist times it was much different than today. When I graduated from high school I was appointed to the Trade and Food College and later I worked for a farming cooperative. At the age of 24, in 1965, I proved good enough that they offered me the position of president of the Gorsium cooperative, which had many financial problems. I introduced several solutions that made the cooperative’s sales grow sevenfold. After that I was spotted by the leader of the cooperative movement in Hungary, who offered me the chance to create the first department store in the capital, Budapest.

KP: A “rotten capitalist” department store in a communist country? That must have been a challenge, no?

SD: Yes, it was a thing unknown in communist Hungary before. The 67 branches of Skala became the first chain department store in the communist world. Moreover, they were always well supplied and worked on a normal, market basis. The Skala department store, which in Hungarian means choice or variety, introduced a bit of capitalism to the planned economy of Hungary. It even had self-service and advertisements.

KP: And what was the next step?

SD: In 1987 I created the first commercial bank in Hungary that soon grew to be the biggest in the country, and made Hungary aim for the free market economy. The bank gave rise to over 100 joint-venture companies. Then in the 1990s I decided to switch to real estate investments, because I knew the value of real estate property would grow, as Central Europe was turning into a free market economy. My main target was Central and Eastern Europe, but I’ve also built in the Seychelles Islands. In the next five years I plan to invest 5-8 billion euro in new properties.

KP: Could you reveal what we can expect?

SD: I think what we really lack in Europe is a place like Las Vegas, totally devoted to all sorts of entertainment. It doesn’t mean casinos only; we also want to create a stage for the greatest artists in the world. It will be located in the south of Slovakia, near the Austrian border and will create 50-70 thousand new jobs. Entertainment and tourism are the future of the world’s business, that’s why I want to go for it.

KP: How did you make your first million?

SD: I made it in the early 1990s when I was a foreign representative for a Hungarian entrepreneurship company. An almost bankrupt Russian state truck company, Kamaz, wanted to become a joint stock company and opened a tender for an advisory company to tell them how to do it. Many well-known and expensive advisory companies participated, but I said that my company and I could accomplish the task for 10 percent of these large advisors’ fees. I also told them that if I didn’t succeed, I would pay them three million dollars. And within a week, all of the released shares were sold and the company was not only restored, but had also made a huge profit. I didn’t earn a million then – it was much more. Somebody from outside of the socialist economy just wouldn’t have known the mechanism behind it and wouldn’t have succeeded.

KP: Why did you decide to invest in Krakow?

SD: I am Hungarian, and I feel warm towards those who historically cooperated with my homeland. If you ask a Hungarian who their favourite neighbouring country is, they will answer “Poland”. That’s why I treat my investment in Krakow emotionally. To be honest, in the times of globalisation we are in a state of constant economic warfare. Here in Central Europe we need to unite our capital, and favour each other’s products to become competition for egotistical countries. The crisis showed that we should not export our capital abroad, but keep it in our market. Bonarka is a great symbol of Polish-Hungarian cooperation.

KP: So you’re against Western capital?

SD: No, not at all. It’s welcome here to create new jobs and pay taxes. But in the time of crisis foreign companies withdraw and the economy collapses. Domestic investors are the ones who support the country all of the time by paying taxes and giving jobs.

KP: What do you think will be the future of Central Europe’s economy?

SD: The old EU is somewhat similar to the falling Roman Empire. In Rome, Roman citizens didn’t want to work and needed slaves to do the job, though they despised them. There were fewer and fewer children and family values disintegrated. Contemporary politicians act as Roman consuls: they give bread and circuses. There is less and less labour in Europe – everybody wants to be politicians, philosophers or journalists and nobody wants to produce anything. If we keep things in the right order in Central Europe, we have a good chance of overtaking the old Europe. Poles and Hungarians need to join their capital and cooperate and we will provide a better landscape for world investors.

KP: What is your recipe for a successful businessman?

SD: I have dealt with many kinds of businesses in my life, and it has helped me with choosing investments. But the most important lesson was that success depends on a great, highly motivated team and a creative approach to people. A businessman can’t be focused only on making money. He should be sensitive to cultural differences, especially in Europe, and help them coexist and cooperate.

KP: Do you have any hobbies?

SD: I am really excited by astronomy, but my true passion is to help underprivileged children and young people. I myself was one long ago.

See also: From Pollution to Solution

4 thoughts on “Sandor Demjan: A Man of Granite”