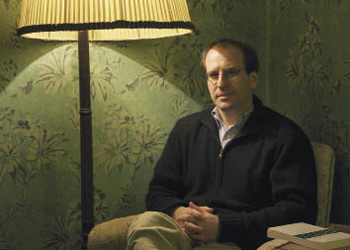 Krakow Post: In the café I heard the opinion that Krakow is a city you come to visit, and then stay. How was it in your case? What made you come and stay here?

David Miller: I think people come to Krakow and would like to stay, but it’s not so easy. In this respect Krakow is different from Budapest or Prague or even Warsaw. The city is not big enough to support a large number of expatriates. So though a lot of people would like to stay, not so many in the end do. The first time I came to Krakow was in 1994 and I lived here 1995-96 and then 1998-99, I think – I can’t keep it all straight myself. The reason I came to Krakow was my ex-wife Karen Underhill, one of the founders of Massolit – there were three of us who started it. She had lived in Poznan in 1994, and then in 1995 she received a scholarship to study in Krakow, and I left graduate school and came with her. You have to understand, my background is Asian Studies, I spoke Chinese and Thai. I always had a curiosity about Russia, but not Poland, so coming to Krakow was related to Karen’s interests. But Karen’s interest in Poland was paradoxically started through me: in 1991, when we both graduated college, we moved to Paris and we lived there for a year. I worked illegally at a bakery and my co-workers were Polish and we became friends, and that was actually the beginning of Karen’s contact with Poland.

KP: Where did the idea of a bookstore come from?

DM: The bookstore originally was conceived as a library. We visited Prague in 1992 when we lived in Paris, and you could tell there were big changes going on. I knew that Eastern Europe was going to have a relationship with [Western] Europe similar to Mexico and America, and for the West it would be a source of cheap labour. It was obvious that was going to happen. But the popular opinion then, I remember, was that Eastern Europe is poor because of communism, and now that communism is over everything is going to be fine, and Poles and Czechs will have Western standards of living in just a few years – something obviously not true to anyone who understood the way our world works. That was when Karen and I first came up with the idea of a library to provide an alternative source of information, because you cannot look at America without looking at Mexico, or Europe without what they were doing in North Africa, everything’s tied. The library idea transformed over time into a book-shop/cafe as a way of financing the library. There was a lot of romanticism as well: I don’t think there is a graduate student in the humanities in America who hasn’t dreamed of owning a bookstore. Karen and I were just crazy enough to do it. In the late 90s I worked in bookstores, and in 2000 I met Matthew Roy, who dreamed of owning a cafe, and in 2001 we all came over together to found Massolit. But the idea of the library lives on, in that I try to bring in books with progressive or critical views, that are otherwise hard to find in Poland. We also import alternative press from the U.S. for the cafe.

KP: The idea has evolved even further as you organize events here like readings and storytime for children. Among others, Olga Tokarczuk and Wisława Szymborska have visited you.

DM: Olga Tokarczuk never held a reading here: she spoke here once as part of a press conference run by Instytut Ksiązki. Massolit has always been a space open to others to organize events. Events we organize are often related to recent translations in and out of English – a new translation into English of Olga Tokarczuk is coming out in a month, and I am talking with the publisher in Prague, Twisted Spoon, about having a reading in Massolit in March or April of next year. As for Wisława Szymborska I know she dropped by – I wasn’t in the store at the time – and I heard she said it was a nice place.

KP: How popular is the Sunday storytime for children?

DM: The storytime for children began over two years ago. We had been thinking of organizing readings in English for children a long time before that, but it was Magda Rawłow, one of the people working in Massolit, who finally brought it to fruition and still runs it. It’s quite popular now, and after the readings we have activities, and the parents get involved, which is great. Massolit has always tried to be friendly to children, from the very beginning we had a children’s corner, and now we’re planning to organize a changing room for mothers and babies in our new cafe rooms.

KP: To what extent do the fluctuations in the number of tourists impact your customer base?

DM: It’s not so easy for tourists to find us, so the fluctuations of the tourist numbers don’t affect us too much. It’s a pretty dedicated tourist that finds Massolit, and they still find us. The mass tourism never came to us to begin with.

KP: National Geographic Traveler lists Massolit as the second top experience in Krakow. How did you manage to get on the list right behind Lady with an Ermine?

DM: I haven’t heard about it before! I think somebody came to Krakow and really liked Massolit.

KP: Would you say then that Massolit is growing?

DM: We’re expanding the cafe now, changing how we get our baked goods, and we’re in the process of getting permission to have wine. I’ve always had a love of baking – I’m personally a chocaholic, and I’ve introduced a chocolate cake that is to die for, and a chocolate raspberry torte. Our apple pie is also very good now – unfortunately Polish people don’t recognize what it is, and don’t try it. We have brought back our chocolate peanut butter cake that hasn’t been around since Matthew left us years ago. And now we have quiche every day, because there has been a lack of non-sweet food at Massolit. Before Christmas we should have wine, and our two new rooms will be finished, so there will be more places to sit in the cafe. I see the wine as a natural continuation of Massolit – Massolit was always more than a bookstore, it was also a place to meet and talk.

One thought on “Advice for Aliens: Massolit Books”