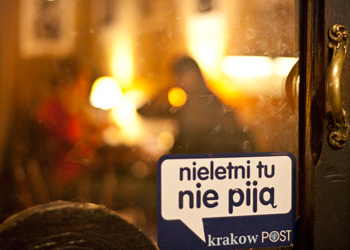 With the free market changes that have swept through Krakow in the past two decades, numerous domestic issues have arisen, sparking heated debate in the public sphere. Family ties recently prompted the Krakow Post to get involved in one such problem. Marta Firlet-Bradshaw (publisher of the Krakow Post) became concerned about the pervasive problem of underage drinking in Krakow after she went searching for her 14-year-old son in the Old Town. She visited numerous bars on and around the Market Square and was shocked to find many 14-, 15-, or 16-year-olds drinking without a care in the world. It is illegal to drink in bars if you are under 18, but the laws and subsequent punishments are grossly ineffective. Mrs. Firlet-Bradshaw decided to take matters into her own hands, and using the platform of the Krakow Post, she launched the Nieletni tu nie piją (Minors do not drink here) campaign in November to raise awareness about the problem and to put pressure on Krakow bars to regulate their clientele more carefully. The media reaction across Poland has been phenomenal and the effects already can be seen in the city.

Perhaps you’ve noticed some blue stickers on the doors of bars, cafes and clubs around town that read “Nieletni tu nie piją”. Or perhaps you’ve even noticed that your favourite bar is being a little more conscientious about carding the kids that frequent the establishment. Both are the intended outcomes of the Krakow Post’s Minors do not drink here campaign, designed to cut down on underage drinking. The campaign gives any and every bar, cafe and pub in Krakow the chance to put a sticker on their door that clearly states their commitment to enforcing the law and not allowing minors to drink in their establishment. In exchange, the Krakow Post has offered free advertising to cooperating businesses (see the list on page 11). Mrs. Firlet-Bradshaw provided the impulse for the initiative and has also become the unofficial spokesperson for the campaign.

Krakow Post: It seems you have done a lot of interviews recently – there has been quite a lot of coverage in the Polish media since the campaign was launched.

Marta Firlet-Bradshaw: Maybe not a lot but a few. I haven’t seen all of them but I was on TVN, Polsat and also did some radio spots. The whole media coverage began with an article in Gazeta Wyborcza that introduced the campaign. Well, actually, the whole thing really started when I went looking for my son in a bar. The media gave me a nickname actually, Matka Nastolatka (mother of a teenager), which has a comical double meaning – underage mother.

KP: Is this a problem that has been getting progressively worse in your opinion or has underage drinking always been an issue in Poland?

MB: Well I don’t have a lot of other friends with teenagers, but everybody says that this is something new and that they have observed it developing over the last 10 years or so. There were always children drinking in the past on special occasions – maybe parties once a month – but now they are drinking every day. One of my friends is a teacher in one of the gymnasiums (middle schools) in the Old Town and she told me that she has students that come for the first lesson at 8 am and they are completely smashed. And they are actually honest and tell her that they are coming from a club 100 metres from the school!

KP: So how widespread do you think this problem is?

MB: When I did this TVN program I met a professor who said that all of the rehab centres in Poland for underage alcoholics are filled for the next half-year. These are rehab centres for teenagers starting at age 11, so that is truly shocking and gives you an idea of how serious this problem is. He gave me several books that he wrote on the subject. However, in general people are totally ignoring this problem in Poland. At the same time, in the U.S. things are completely different. I just got back from a trip to Las Vegas and I was actually asked for my ID in a bar and it was totally sweet (laughs). But she (the bartender) wasn’t joking and she really wouldn’t serve me. I said “come on”, and she said that was the law and she couldn’t serve me. There is much stricter regulation.

KP: Why is it that bartenders and bar owners allow kids to drink in their bars do you think? Is it just greed?

MB: Exactly. Times are tough – bars are closing, people need to make money. Also, the majority of the bartenders or waitresses in Krakow are students trying to make money from tips, which means selling drinks to as many people as possible, even kids. There’s another aspect: everyone wants to be seen as the “cool uncle”. Because the bartenders rarely have children of their own, they are not sensitive to this problem.

KP: What are the consequences if you get caught drinking as a minor in Poland?

MB: Well I know from the police. The child is taken to the station and held for several hours until their parents pick them up. Rather humiliating for the parents and child, but that’s pretty much it. If the problem continues, the police will eventually get involved and send a social worker or child services agent, which becomes a big problem for the parents. If the child is caught in a bar, however, it is the bartender, not the bar owner, that has to pay a huge fine. This is also a big problem in Poland because the bar owners only get punished after multiple violations.

KP: In the U.S.A., there is the D.A.R.E. program (Drug Abuse Resistance Education) in elementary and middle school to educate kids about the dangers of drinking and using drugs. Is there any kind of program like this in Poland?

MB: Not really and this was also the point. There was really a big reaction to the Wyborcza article and a lot of schools got on board with the campaign. Teachers know it is a problem and so do a lot of parents, but they didn’t know what to do about it. Now there is an actual dialogue as to whether it is the responsibility of schools or parents to educate kids about the dangers of drinking. There is already talk of doing a short seminar in some schools. Something every other month or so is a great idea, I think.

KP: What are the goals of the Nieletni campaign exactly? What do you hope to accomplish in the best-case scenario?

MB: Well I think it’s already been successful. The point was to get people talking about this problem, and judging from the reaction in the media and the comments online we seem to have touched a nerve. About the sticker campaign itself, even if it makes it just a little bit harder for teenagers to drink in bars then I think it’s a great success. This wasn’t really a planned action, it just happened spontaneously. And I’m not against partying either you know. I don’t want to be misunderstood in this whole thing. I just thought this is an issue that people needed to be aware of. I hope that this issue will stay in the public forum.