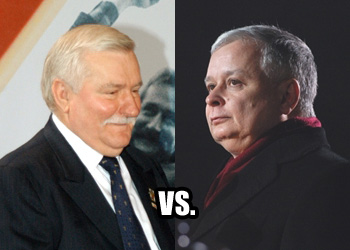 Lech Wałęsa is suing President Lech Kaczyński for slander. The case began in a Warsaw court on Tuesday, but has been postponed until 18 December.

Last year, during an interview on Polsat television, Kaczyński stated that Wałęsa collaborated with the Communist Secret Police under the codename “Bolek.” Wałęsa wants Kaczyński to publicly retract his statement, and is seeking 100,000 złoty in damages.

Kaczyński’s Polsat interview was viewed in court on Tuesday, but further proceedings were scheduled for 18 December. Since it is a civil case, neither Wałęsa nor Kaczyński are required to show up personally in court. They were both represented by attorneys.

As the Polish Press Agency reported, Kaczyński’s lawyer is seeking for the case to be dropped, claiming that the president can only be asked to answer in front of the State Tribunal, not a normal court.

Wałęsa’s lawyer disagrees, claiming that the interview Kaczyński took part in was not part of his functions or responsibilities as president, as defined in the constitution.

Wałęsa’s lawyer also pointed out that in 2000 the Vetting Court cleared Wałęsa of collaboration with the Secret Police, and that Kaczyński has no right to undermine that decision.

Kaczyński previously sued Wałęsa for saying on television, “We have a dummy for president,” but the case was dropped.