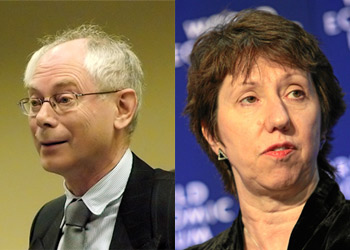 The EU may have a new president, in the figure of Belgian Prime Minister Herman van Rompuy, but in Poland he will simply be known as Przewodniczący Van Rompuy (Chairman Van Rompuy). That’s widely reflective of the general feeling in Poland that this low-key Belgian will simply act as another bureaucrat in Brussels.

Polish Prime Minister Donald Tusk spoke to reporters when the decision was announced yesterday evening, saying, “We acknowledge that this choice is simply safe for Poland”. The Polish favourite for the job had been Luxembourg’s Prime Minister Jean-Claude Juncker, but in his view, the European Union is not ready for a high profile figure to occupy its top spot.

The other contested spot chosen yesterday was for the office of the High Representative for Foreign Affairs and Security Policy. British Baroness Catherine Ashton was chosen for the position. Commenting on the appointment, Prime Minister Tusk said she is a bit of a mystery, but he is happy that a woman will occupy one of the top positions.

Former Polish prime minister and current president of the EU Parliament, Jerzy Buzek, told reporters that after the implementation of the Lisbon Treaty and these new appointments, “The EU will be better managed as there will be continuity of work between rotating presidencies”.