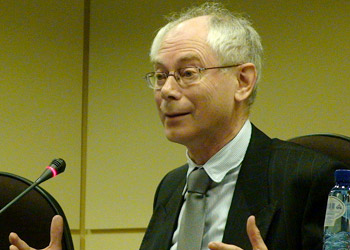 In many ways, today is the day that will decide the future of the European Union. The heads of the 27-nation body will gather this evening in Brussels over an informal dinner summit in order to choose the new president of the EU, the High Representative for Foreign Affairs and Security Policy, as well as the Secretary-General of the European Council Secretariat.

The president, chosen by the 27 member states by qualified majority vote, will serve a 2.5 year term with the possibility of one re-election, during which he or she will chair the European Council, set the agenda for the EU Council of Ministers, and perhaps most importantly, represent the EU on the world stage.

The meeting will start over dinner and is expected to last well into the night, as at the moment no clear favourite has emerged. Former UK Prime Minister Tony Blair was an early favoured candidate, but has since been deemed unlikely after several countries, including Poland, criticised Blair as being too high-profile. A less prominent nominee will likely be backed by France and Germany, the Belgian Prime Minister Herman van Rompuy. Also in the running are Dutch Prime Minister Jan-Peter Balkenende, former Latvian President Vaira Vike-Freiberga and Luxembourg’s Prime Minister Jean-Claude Juncker. Meanwhile, former Italian Prime Minister Massimo D’Alema is the leading candidate for the role of the foreign affairs high representative, who will hold the seat of vice president of the European Commission.

But Polish leaders say this process is lacking in one key factor: transparency. BBC News reported today on a Polish foreign ministry proposal, which states that the EU summit should “operate with transparency”. According to the proposal, the candidates for the jobs of EU president and EU foreign affairs chief should clearly present their views in the form of a presentation. This should be followed by a discussion and vote.

However, how the actual meeting will play out remains a mystery to the public. The summit will be chaired by Swedish Prime Minister Fredrik Reinfeldt, as Sweden currently holds the rotating EU presidency. Speaking to the BBC, he said that “at the informal summit, which will take the form of a working dinner, it is hoped that an agreement can be reached [on the appointments]”.

The EU leaders have a difficult job ahead of them, as not only must they strike a balance between smaller and larger EU nations, but between the centre-left and centre-right parties dominating the political arena. But as the Lisbon Treaty is set to become valid on 1 December, little time remains for this pivotal decision.