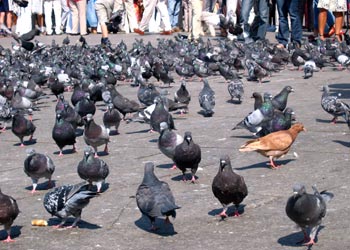 Krakow’s Market Square is notoriously infested with pigeons, and while both locals and tourists have mixed feelings about the birds themselves, the Polish courts have made their views clear: pigeon tossing is animal cruelty.

Two men from the UK, both aged 24, were convicted in a Krakow court and fined 600 złoty each after they pleaded guilty to animal cruelty. The incident they were fined for occurred 24 October, when the men tossed two pigeons into the air. The birds were unable to open their wings, which broke upon their impact with the ground.

The men are Lee James W. of Ulverston and Arron David P. of Barrow-in-Furness in Cumbria, though their surnames have not been disclosed under Polish privacy laws. The court hearing took place without the knowledge of the British consulate in Poland.