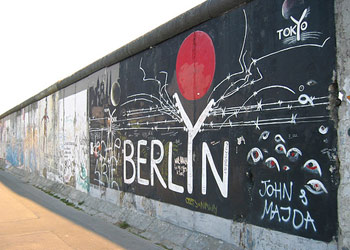 Exactly 20 years ago from today, on 9 November 1989, the Berlin Wall was torn down. The celebrations marking this anniversary today in Berlin will be boisterous. They will be attended by the cream of the crop of European leaders, including British Prime Minister Gordon Brown, French President Nicolas Sarkozy, Russian President Dmitry Medvedev, President of the European Commission Jose Manuel Barroso, and former head of state of the U.S.S.R. Mikhail Gorbachev. Opposition leaders from former Soviet bloc countries will also be on hand, as well as U.S. Secretary of State Hillary Clinton.

Poland will be represented by Prime Minister Donald Tusk, head of the European Parliament Jerzy Buzek, and of course, the first democratically elected president of Poland after communism, Lech Wałęsa.

Wałęsa will play a prominent role in the celebrations. He will strike down the first of 1,000 dominoes, a chain nearly two kilometres long, that will fall along a fragment of the old border between East and West Berlin, from Potsdam Square to the Reichstag. The dominoes will symbolically knock down the wall again.

Wałęsa will knock down the first domino as recognition for his role in being the leader of the first independent trade union in the Soviet bloc, Solidarity. Solidarity was born in a Gdańsk shipyard in 1980. After the government unexpectedly announced a sharp rise in the price of meat, workers in Poland’s major cities went on strike. Wałęsa, at the time an electrician, climbed a fence to get into the Lenin shipyard in Gdańsk and took charge of the failing strike there.

The strike was concluded in August 1980, by the signing of the Gdańsk Agreement, in which the communist authorities agreed to the formation of Solidarity, an independent, self-governed trade union with the right to strike. Solidarity went on to be banned in 1981, when General Jaruzelski declared martial law. It continued to operate underground until late 1989, when nationwide strikes forced the authorities to legalize it again. The Round Table negotiations followed soon after, and led to semi-free elections, in which Solidarity crushed the communist government. A year later, Wałęsa was elected president.

Although Solidarity’s role in bringing about the collapse of communism and the unification of Europe is recognized outside of Poland, the fall of the Berlin Wall, as demonstrated by today’s celebrations, continues to be the most recognized event of the incredible year of 1989. That year was filled with a chain of events across the Soviet bloc that led to its collapse. Hungary opened its borders with Austria, allowing thousands to flee to the West. The Velvet Revolution in Czechoslovakia culminated in the election of dissident Vaclav Havel as president. The bloody revolution in Romania resulted in the execution of President Nicolae Ceauşescu. Every one of those events, and others, was important, and every country from the former Soviet bloc should be proud of its role.

However, the fall of the Berlin Wall is the most recognized event from those times because the wall was the perfect metaphor for the divide between East and West. On 9 November 1989 cameras recorded images of thousands of ordinary people dancing on the wall and striking it down with hammers. Those images were relayed around the world, and that event seemed to be the culmination of events that led to the unification of Europe. Solidarity’s role, on the other hand, was a more on-going process, and in the end it did not have such a dramatic conclusion that was broadcast around the world.

Wałęsa was in Berlin on the night the wall was torn down, as was Gorbachev and Germany’s current chancellor, Angela Merkel, who will also take part in today’s celebrations. Before leaving for Berlin, Wałęsa said, ”The first victory was at the Gdańsk shipyard, and then all those victories that followed stemmed from that one triumph. The first wall was torn down in Gdansk, whereas the collapse of the Berlin Wall was one of the final victories.”

From the Polish perspective, that is indeed how the fall of communism is seen. According to a recent survey authorised by the European Commission, 68 percent of Poles believe that the Solidarity movement in Poland impacted the fall of the Berlin Wall, not vice versa. 51 percent think that Solidarity was the most symbolic change in the region, while 29 percent think that it was the Round Table negotiations and the elections of 4 June 1989. Only 13 percent mentioned the fall of the Berlin Wall as the most symbolic event of 1989.

However, Poles recognize the symbolic meaning of the fall of the wall. 79 percent of those surveyed think the event contributed to the unifying of Europe, while 69 percent think it meant the end of the Cold War and the division of Europe into two ideological camps. But, many Poles also believe that the fall of the wall did not have a real impact on events in the region. 73 percent believe that the significance of the fall of the Berlin Wall was more symbolic than realistic. 47 percent think that the changes and unification of Europe would have happened without the event.

One thing is for sure. After 20 years most Poles are satisfied with the changes that 1989 brought about. According to a study by the Institute of Public Affairs, 59 percent of Poles are happy with their situation today after the changes of 1989. Poles rank among the most satisfied in the former Soviet bloc, with only the Czechs expressing more happiness, at 68 percent. Slovakians also ranked high with 53 percent, while only 28 percent of Hungarians are happy with the changes today. Feeling the pain of the financial crisis and fed up with political instability, the citizens of many other countries in the region are disillusioned by capitalism and democracy.

So, despite the Polish characteristic of constantly complaining about their politicians, and seeming to have virtually no trust towards them, Poles have reasons to be happy. Recently, the European Commission announced that Poland’s per capita GDP in 2009 will be 14,100 euro, and it will soon surpass Estonia and Hungary in that respect. But, what is perhaps more surprising, is how quickly Poland is catching up to its western neighbours. Piotr Bujak, an economist at BZ WBK, told Rzeczpospolita that in 2009 Poles will be 52 percent as wealthy as Germans and 44 percent as wealthy as the Irish. Poland’s economy is still expanding in the midst of the financial crisis, while Germany and Ireland are in recession. At this pace, Poles could reach economic equality with Germany in 20 years, and with Ireland in only 14 years.

The free market reforms that were put into effect in Poland after 1989, although initially painful, are paying off. Maja Goettig, chief economist at BPH Bank, told Polish Radio that Poland’s GDP increased by 75 percent over the past 20 years.

Poles appear to believe that Solidarity was more important than the fall of the Berlin Wall. That is not surprising. But, today surely marks a day that all Europeans, Poles included, can be happy about: the day that the metaphorical and real wall between East and West was knocked down.