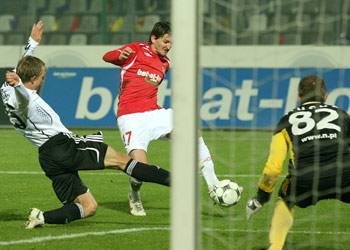 Wisła Krakow may still be the leader in the Ekstraklasa after thirteen rounds, but the balance in direct confrontations with fellow title contenders is a negative one and a worrying sign after Legia Warszawa defeated the Cracovian “White Stars” on their temporary home turf in Sosnowiec 1-0. Wisła Krakow defeated Ruch Chorzów on the opening day of the season (2-0, 1 August 2009), but has lost to rivals Lech Poznań (0-1, away) and now had to submit against archrivals Legia at home.

Set up tightly, playing on the brink of being offside and a tough battle on the whole pitch – that was the play of Wisła and Legia throughout the first half of the most exciting match of the autumn round. In an evenly matched battle, it was home side Wisła with the most attempts on goal, but an injury of Legia right-wing midfielder Sebastian Szałachowski in the 32nd minute turned out to be for the best for the visiting team. His replacement, Miroslav Radović, scored a goal with his first touch on the ball after Wisła left-wing back Piotr Brożek made a huge mistake and gave the Legia substitute an opportunity he couldn’t miss.

The second half was one way traffic: Wisła attacked all out and Legia grew faint, but in the end held firm, celebrating their first away win against Wisła since 1997, even though this edition was held in Sosnowiec and not in the Wisła stadium in Krakow.

With several scouts from various clubs sitting in the Ruch Stadium (amongst which, scouts from Chelsea FC and PSV Eindhoven), local team and current runner-up Ruch Chorzów had a perfect chance to make use of the points dropped by the table leader. Under the leadership of the formidable attacking duo Andrzej Niedzielan and Artur Sobiech, Ruch played itself to an easy 5-2 victory against Jagiellonia Białystok. Andrzej Niedzielan, the last two seasons a player for Wisła Krakow, scored three goals while his 19-year-old attacking partner had two goals on his tally. It has brought Ruch Chorzów within range of Wisła Krakow, trailing only by three points.

Mariusz Sacha proved to be valuable for his team Cracovia, scoring the only goal in the away game against Polonia Warszawa. It was his third goal of the season and it took Cracovia from the bottom spot, immediately out of the relegation zone. Polonia however, now falls back into that same zone, which is remarkable as the team finished fourth last season and was near Europa League football this season.

For both teams city derbies await next week. The so-called “Holy Wars” will take place in Warsaw and Krakow. Cracovia will see their rivals Wisła Krakow paying them a visit. Normally it would be a matter of crossing the Błonia field, but this time the Ekstraklasa leaders will come from Sosnowiec and the only team actually playing in Krakow will hope to capitalize on that fact.

In Warsaw, Legia faces off with Polonia and if that wasn’t enough, Ruch Chorzów will meet with that other top team from Poland, Lech Poznań, currently fifth in the table.

Due to the national teams playing two games in between, which will also include the debuting new head coach of the Polish national team, Franciszek Smuda (against Romania), the next and fourteenth round of the Ekstraklasa will be played 20-22 November 2009.