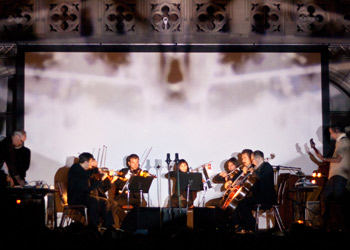 For seven years now, the Unsound Festival has been redefining the electronic music scene in Central and Eastern Europe. But what started off as an ambitious little festival that brought ground-breaking artists to smoke-filled cellars has reached levels I doubt even its creators imagined.

This year, huge names in electronic, neoclassical, and various other genres of experimental music from around the globe arrived in town (well, except for Zomby). Concert after concert sold out. Venues whose halls had never witnessed these kind of sounds were utilised in creative ways. And yet, as massive as the festival became this year, it never lost its independent spirit – the best testament to this would be the fact that you could easily catch the performers and panellists attending most of the concerts throughout the week-long festival, freely chatting with fans. Never have I witnessed such a blurring of the lines between audience and performer at a festival. And perhaps that was helped by the fact that many of the artists spoke on the various panels or workshops or were featured in the films shown, which created an accessibility that invited conversation.

But what Unsound did best this year, as in previous editions, was to stretch the imagination and answer the most fantastic queries: What would ambient music sound like in hell? (Answer: Sunn O)))) What do you get when you combine the musical traditions of Hasidic Judaism with acid house? (Answer: Moishe Moishe Moishele). Can electronic music be evaluated the same way we evaluate classical compositions? (The New York-based Wordless Music series creator says yes). Do artists need to perform on a traditional stage placed at the back of a room, or is that just an antiquated practice that does not apply to today’s music? (Monolake argues for the latter). And most importantly, does a festival need to stick to one genre to be successful? It’s safe to say that this year’s Unsound proved that this is definitely not the case.