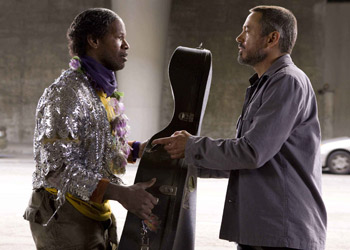 Rarely does it happen that I find myself buying a ticket for a movie I have no prior knowledge about. Somehow, The Soloist became one of those movies. Maybe it was the intriguing poster I saw on the display, or maybe I just felt that seeing a film about a musician would somehow prolong the enthusiasm I still felt after witnessing so many great events during the Unsound Festival. Anyway, I rushed to the ticket booth and about two minutes later was sitting snugly in the comforting darkness of the cinema.

It’s a fact that music and movies coexist in a very exceptional correlation. Not so long ago, in a conversation with renowned Polish film director Wojciech Marczewski, he expressed that despite the common idea of film drawing its narration and aesthetic directly from literature, it’s really music above anything else that seems to be the closest to the art of moving pictures. Consequently, those familiar with the very nature of music are more likely to understand and find comfort watching movies.

Taking a look back, film scores have made up quite an impressive amount of certain composers’ oeuvres. It suffices to mention movies like Shine, The Piano, Walk the Line and my personal favourite, The Legend of 1900, wonderfully scored by Ennio Morricone. In The Soloist we follow the true story of Nathaniel Ayers (Jamie Foxx) – a talented cellist and a passionate musician who, because of his developing schizophrenia, drops out of music college and is eventually rendered homeless. Meeting LA Times writer Steve Lopez (Robert Downey Jr.) who, as time passes, is more and more fascinated by Nathaniel, becomes a life-changing experience for both characters.

It is the acting that provides the most engrossing element of the film. Both Jamie Foxx and Robert Downey Jr. play their characters subtly and convincingly, letting all the nuances ramify. Thanks to them, the movie captures a spirit music lovers will be familiar with: a unique feeling of liberation, beauty, grace and perfection, and the omnipresent longing for them against the odds. The Soloist tells it all without becoming pretentious or lofty.

The Soloist is also an interesting study of the alienation of an artist and schizophrenic. Although some aspects of Nathaniel’s personality might have been narrated in a slightly less generic way (a sequence of flashbacks from his student years comes to mind), the movie remains fairly consistent, delivering a convincing plot and solid character-driven narration.

So thanks to The Soloist, I can finally say that I’ve seen a good film this month – not spectacular or especially groundbreaking but decent; poetic and thought-provoking. So now, even though you probably know more about The Soloist than I did while waiting for the film to start, by all means be as spontaneous and go see it. It’s time well spent.