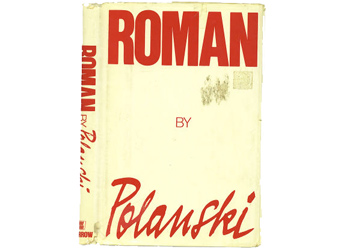 Polanski was born in Paris in 1933, but spent his formative years in Krakow. His 1984 autobiography suggests some ways in which that period foreshadowed his later life. “For as far back as I can remember,” he tells us, “the line between fantasy and reality has been hopelessly blurred.”

His father was a plastics manufacturer in a small way. The family lived on ul. Komorowskiego, a short stroll from the Vistula embankment with its view of the castle; he watched the fireworks displays and the candlelit wreaths levee.

He was six when the Germans invaded. The Polanski family celebrated Christmas, but the Germans were interested in their Jewish background. The Polanskis ended up in the newly established ghetto. At first, alone or with his father, Roman passed in and out of the “closed district”. His mother disappeared on an early transport, and he never heard of her again (she died in Birkenau). His father (who survived the liquidation of the ghetto, and Płaszów and Mauthausen concentration camps) prudently arranged a “trust fund” and a non-Jewish family outside the ghetto who would make sure that the boy had a hiding place. Polanski spent much of his time in the darkness of movie houses; later, he passed empty months at a dirt-poor farmstead at the back of beyond.

Twelve when the war ended, Polanski shared a problem with many other surviving Jewish children his age: he had an incredible range of disturbing experiences, but no schooling. His father returned to Krakow with a new bride, and Roman chose not to live at home. So he found himself on his own, in a rented room, without having gone to first grade.

Movies, photography, audiovisual equipment, and racing bicycles were the boy’s first obsessions. The latter almost cost him his life when a stranger lured him into the “bunker,” a spooky abandoned German aircraft shelter in Park Krakowski, on the pretext of selling him a pre-war racing bike hidden there. In the darkness, the stranger bludgeoned and robbed Polanski; it later turned out that the assailant was a serial killer who had already committed three murders.

Polanski had a natural talent for acting, and the good fortune to come to the attention of people who gave him a chance. Before long, he was performing on the radio and then, at 16, in the Groteska Theatre.The director, Władysław Jarema, perhaps foreshadowing Polanski’s future adaptation of Oliver Twist, “fundamentally abhorred children, [and] put on children’s shows only to keep his municipal grant.” The adolescent actors “were treated like adults,” Polanski recalls; “parties were regularly held in the lobby of the theatre itself.” On one occasion, “sexual activity was going on in the unlit parts of the theatre.” Polanski’s friends set him up with an 18-year-old girl, but he lost his nerve at the last moment.

As a budding 17-year-old actor in Krakow, Polanski had a growing circle of non-conformist friends. They haunted the flea markets. “Shoes were all-important. The most sought-after had no toe-caps. Black leather was the conventional material, although blue suede was even more highly prized.” The right tie was crucial, Polanski recalls. “My own particular pride and joy was a huge American fishtail, ultrawide, part yellow and part maroon, with a stylized rose in the middle. Hair was worn upswept at the front and brushed back into a ‘duck’s ass’ behind.” This was 1950; Polanski and his friends were already cool in Krakow.

The communists systematically imposed increasing administrative restrictions on the black market, entrepreneurs like Polanski’s father, and the “old money” of the aristocracy. The young actor found himself moving in ever-higher social circles. Through Wiesław Zubrzycki, “a Catholic intellectual and avowed political reactionary,” Polanski “started meeting the remnants of the nobility, who lived in crumbling mansions or cluttered apartments, selling off the last of their family heirlooms now that all their estates had been seized.” He recalls that “they habitually spoke French and talked of Western Europe as if it were still a part of their daily lives.”

Polanski’s young friends “displayed their contempt for authority by taking a keen interest in contemporary Western literature and music, notably jazz, by baring their souls in a very un-Polish manner, and even by engaging, almost as a matter of principle – in homosexuality.” Their endless sessions of talking, smoking and drinking began in the cafes and often ended in the spooky-looking neo-Gothic tower room that Zubrzycki occupied in a building his father had designed on aleja Słowackiego. Polanski avers to having his first sexual experience there, without going into the details.

The future director also threw himself into the musical scene inspired by Voice of America radio broadcasts. “Unless he had already been successfully indoctrinated, any normal young Pole developed a craze for jazz during the Stalinist period,” he recalls. “It was not only a window onto a completely different world but a form of protest, for American jazz was officially decried as a product of ‘rotting imperialism’. There were some remarkably fine jazz musicians in Krakow, mostly students who met for weekend jam sessions, the venues of which were advertised by word of mouth. Though never raided, these sessions were held clandestinely, in classrooms or ‘safe’ apartments.” After Stalin died, jazz gradually won acceptance, while managing to retain the cachet of once-forbidden fruit.

Polanski was talent-spotted by the dictatorial director of the Fine Arts secondary school, and then arbitrarily expelled. Times were hard for tender artistic spirits in the desperately poor, war-ravaged country. One of his best friends had to take a job in a Silesian coal mine and reappeared as a ghastly, tubercular figure in rags.

Just when Polanski was dreading a similar fate, or the worse alternative of being drafted, he received a call from a student at film school named Andrzej Wajda. On the strength of having seen Polanski’s work in the children’s theatre, Wajda wanted to cast him in his first feature film, Pokolenie (A Generation). One future Oscar winner came to the rescue of another.

Polanski’s counter-cultural idyll in Krakow ended when he won one of six coveted spots in the director’s class at the Łódź Film School. Within a few years, he had embarked on the international career that is now overshadowed by the ongoing consequences of the statutory rape he committed in Los Angeles in 1977 – which he discusses in a self-exculpatory way in this 1984 account. Of most interest to us in Krakow is the way that his blurring of fantasy and reality, black humour, and constant war with conventionality all seem rooted in his local beginnings.

An extended version of this article can be read at www.letters.krakow.pl.