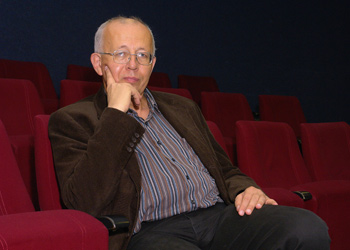 What began as a small, independent festival of student films has bloomed into Etiuda & Anima, the most celebrated animation festival in Poland, now in its 16th year. To find out more about Polish animation, the Krakow Post spoke to Bogusław Zmudziński, the artistic director of the festival.

Krakow Post: Poland has a rich history of animation stemming all the way back to Władysław Starewicz. Are there any animators, old or new, that you would recommend to the uninitiated?

Bogusław Zmudziński: The key moment for Polish animation, when the term “Polish School of Animation” began to appear in the foreign press, was the second half of the 1950s. That was when Walerian Borowczyk and Jan Lenica began to make films together, perhaps not fully aware of this tradition going back to Starewicz. They began to truly develop Polish artistic culture, not just in the field of animation. They were graphic artists as well, known for their poster art, and one can say that the roots of Polish animation go back to “classical” art: painting, graphic design, the Polish poster.

The best years for Polish animation were the 1960s and 70s. That was when the canon of what would be called the Polish School of Animation was established: Witold Wiersz, Daniel Szczechura, Jerzy Kucia, Zbigniew Rybczyński, Stefan Schabenbeck. All of these animators can be found in a recently released collection from Polskie Wydawnictwo Audiowizualne, which is the only source I would recommend for our foreign viewers, because from a few DVDs one can see what the phenomenon of the Polish School of Animation really meant.

KP: And what about more recent films?

BZ: Today the situation is different. We’re in a state of a long-lasting crisis [in animation], which began after 1989.

KP: So how does Polish animation post-1989 compare to the films produced during the communist era?

BZ: The differences come in one sense from the system of production, and paradoxically from the fact that creative freedom emerged, which was missing before. In general, it seems that fewer talented people are interested in using animation as a means of artistic communication.

The root of the problem stems from the fact that it is very difficult to produce an animated film today. The means of getting sufficient funding are not in place. One can get 50 percent in grants from the Polish Film Institute, but the producer must find the other half himself, which is very difficult.

KP: Why is funding so hard to come by in Poland?

BZ: Short-form artistic animation is not a commercial product, and the investment is rarely returned, usually only in the case when a film receives an Oscar. That’s one problem.

This creative freedom [after 1989] is another one. In the 60s and 70s, Polish animation spoke to the viewer in a specific, coded language. It didn’t always touch on political matters, and more often asked universal philosophical questions. It did so in ways that made it difficult for the censors to stop these kinds of films from being shown. And they were screened in cinemas, because back then feature films were preceded by so-called extras, in the form of short, usually animated, films. Today we have advertisements.

Another thing that has changed is that today, interest in animation is often more focused on the technology – on using computer animation. It has become a branch of general audio-visual communication, rather than its own defined genre.

KP: Are there any notable names in contemporary Polish animation?

BZ: Two names are regularly (and deservedly) thrown around: Piotr Dumała in Warsaw, who has just finished his first full-length film, which will open the festival, and Jerzy Kucia from Krakow, who has been with the festival from the start and is working on a new short film.

Out of the younger generation, no one has yet matched the achievements of these two artists, though there are some promising names, such as Tomasz Bagiński. And there is a new wave of young people who have just debuted or are about to debut their first films, so one can hope that in a short amount of time, if the proper financial conditions arise, this new wave will revive the art form.

KP: An aspect of the Etiuda and Anima festival is student films. What do you think of the state of film education in the country right now?

BZ: Today, one doesn’t necessarily enter the film industry through a film school. Independent films, which were once called amateur films, attract certain talents and they can easily compete with graduates of film schools.

However, I think that a good film school is able to teach comprehensively the basics of the craft and provide a creative atmosphere. We value these creative efforts, which is why every year we award both the best artist and the best pedagogue. Recently, both the Katowice Film School as well as the more famous Łódż Film School have been consistently earning awards at the festival.

While Polish film is going through this everlasting crisis, the first signs that the crisis may be ending have started to appear. Just this year, several very interesting titles were shown at the Gdynia Film Festival. I would say that we had already noticed the beginnings of the end of the crisis in the film schools a few years ago, and now this is being confirmed in the professional circuit.

KP: Is there anything you’d particularly like to recommend at this year’s festival?

BZ: Well, since I’m the one responsible for creating the programme, I have to recommend everything! It’s very hard to pick just one thing, but I’d like to draw attention to one very unique experience, which is the meeting with a well-known animator whom we invite, who presents his or her films in person. This “autobiography of an artist” series includes not only the screening of an artist’s films, but also their chance to show how their craft is created in front of an audience – through live drawings and animations. These are magical meetings – ones that are remembered for years. I think that this is the jewel in our crown.

For a full programme of this year’s festival, log on to www.etiudaandanima.com.