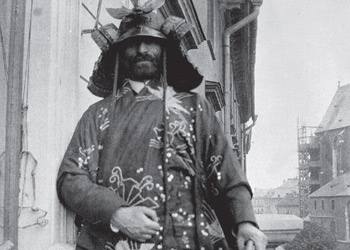 It’s hard to believe that the Manggha Museum has already stood for fifteen years. And if any single Cracovian enterprise has embodied the promise of Poland’s transformation, then here we have it. Conceived at a time when the communist regime was crumbling, Krakow‘s casket of Japanese wonders, gathered by Feliks “Manggha” Jasienski at the close of the 19th century, emerged thanks to Andrzej Wajda, Poland’s most celebrated film-maker, and his wife Krystyna Zachwatowicz, the distinguished set designer. In 1987, the director scooped the Inamori Kyoto Prize for his life-time achievement in film. Overwhelmed by the generosity of the award – a royal sum – he immediately set about translating the prize into a public project. There were plenty of obstacles. But the enthusiasm of acclaimed Japanese architect Arata Isozaki helped galvanise the campaign. And then, in 1989, the political map changed irrevocably, offering limitless possibilities for progress.

Over the last 15 years, the Manggha Museum has earned a reputation as an impeccable host of cultural events. Besides presenting exquisite exhibitions of Japanese art, the museum has opened its doors to some of the most cutting edge music and film festivals of the moment. Manggha continues to act as a beacon for the art of Eastern Asia, and it is poised for expansion over the coming years.

On Monday 30 November, the museum will be throwing open its doors to all comers in celebration of the 15th anniversary. Visitors will have the opportunity to meet founders Andrzej Wajda and Krystyna Zachwatowicz, who will be encouraging guests to enjoy the enormous birthday cake. In the meantime, visitors can explore the jubilee exhibitions in the company of the curators themselves, and there will be origami and calligraphy demonstrations for the curious. Special screenings of Japanese films – especially from the field of animation – can be enjoyed, as well as the ancient ritual of the tea ceremony. Competitions with numerous surprise awards are also up for grabs – all in all a fantastic day out for the entire family. Open 10 am to 6 pm.