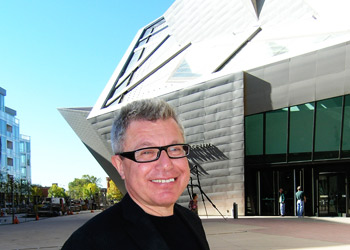 He’s widely hailed as the world’s most exciting architect, but few know that Daniel Libeskind was born in the central Polish city of Łódź. However, all that looks set to change, following the architect’s visit to his home town in October.

“I don’t feel an American or a Jewish architect, but indeed a Polish one,” he told a crowd of academics and architects at the Łódź Arts Centre.

Libeskind has signed a letter of intention with Włodzimierz Tomaszewski, vice president of Łódź, outlining plans for a new edifice at the heart of the EC1 complex; the much vaunted city of culture that is scheduled for construction in the near future. Łódź has high hopes of becoming European City of Culture in 2016, and Libeskind’s backing will add a spring in the step of the campaign.

The architect, who was a child musical prodigy, emigrated with his family to America in 1959. Although for many years an architectural theorist, he did not design his first building until he was 52. However, projects such as the Jewish Museum in Berlin (1999), and the Imperial Museum North in Manchester (2001) swiftly placed him amongst the ranks of the world’s most sought after architects. In February 2003, he won the competition to be the main architect of the new World Trade Centre.

More info on Łódź’s planned city of culture can be found at www.ec1lodz.pl