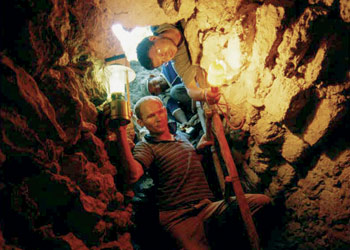 Today, there is no need for the eccentric British adventurers and explorers of the Victorian era, such as Richard Francis Burton, Henry Morton Stanley, or Dr. Livingstone (I presume?). Likewise their 19th century Polish counterparts, such as Bronisław Grąbczewski, who willingly charted the Asian borders of the Russian Empire, or Bronisław Piłsudski, who was sent there against his will. Ignacy Domeyko explored Chile, while Ernest Malinowski built the world’s highest railway in the Peruvian Andes. Paweł Edmund Strzelecki made discoveries in the land down under – in case you didn’t know, he named Australia’s highest peak “Mount Kosciuszko”. And of course, there was Józef “Conrad” Korzeniowski, who navigated the high seas. His Heart of Darkness should be every explorer’s bible.

Today, our tiny globe is thoroughly explored, measured, weighed and photographed from above. And no one will ever write again on an uncharted stretch of the map: Hic sunt dracones – “Here be dragons”. Anyone wanting to explore anything new in today’s world should physically dig into the past. And that would be an archaeologist.

What is the common image of an archaeologist in popular culture today? Is it that of Howard Carter and Lord Carnarvon, two classic British gentlemen in tweed suits and melon-shaped safari helmets, gazing in awe at the young pharaoh’s tomb, filled to the ceiling with gold marvels? No, those days are ancient history now. Or how about one of the most famous film characters of all time, Dr. Henry “Indiana” Jones, Jr.? He sports a trademark fedora hat, a worn out leather jacket, a bullwhip in one hand and a pistol in the other. This hard-faced swashbuckler fights his opponents with bare knuckles, performs incredible stunts, travels seven countries in one day, and eventually discovers the world’s greatest treasures. To say nothing of defeating the whole German army in the meantime.

Those who are more familiar with the subject, share a quite different and more mundane image of the archaeologist: a figure squatting down on the ground, painstakingly removing layers of dirt with a fine brush, only to uncover some broken pot several months later.

So does anyone actually fill the void between these two extremes? Well, here are two of them: Dr. Jarosław Źrałka and Wiesław Koszkul of the Jagiellonian University’s Institute of Archaeology. For the past four years, these young academics have conducted their own excavations in the ancient Maya town of Nakum in northeastern Guatemala, following their previous work as a part of the Triangulo Project covering the Yaxhá-Nakum-Naranjo National Monument Park. Their work is quite pioneering in Poland, since the Chair of American Archaeology at their Institute was founded just two years ago.

“Polish archaeologists have been working in the Mediterranean, most notably Egypt, since the 1930s, and in South America since the early 1970s,” Dr. Źrałka explains. “But Mesoamerica – particularly Guatemala – is still terra incognita. Because of Guatemala’s troubled political past, archaeologists rarely ventured into certain rural areas. This, and the fact that the majority of ancient Maya buildings there are still completely covered by dense jungle vegetation, makes it a land of plenty for us.”

And that is indeed just how it turned out. For in 2006, just a few weeks after the excavations began, they discovered a royal tomb from the Late Classic period (around 700 AD) in one of the stepped pyramid structures.

“The discovery of the tomb chamber itself…,” Dr Źrałka begins, his eyes lighting up. “Well, it was already past midnight when we were finally able to lift the stone slabs. Amidst dim lights and flickering shadows we peered inside. The intensity of that moment was phenomenal. It surpassed anything I have seen in my entire life.”

Apart from beautifully painted ceramic vessels and scores of small items of jade and shellstone jewellery in sacrificial deposits, their most precious find was a jadeite pectoral, an ornamental piece worn on the chest.

“The discovery of an unrobbed tomb was already sensational, but finding the pectoral was a real prize. There are just three or four similar pieces in the world. Ours is one of very few – perhaps the only – to come from a legal excavation, with full archaeological context. Many pre-Columbian artefacts found in American museums are obtained from collectors, and their origins are unknown.”

So is it all about little work and lots of fame and glory? Well, not so fast. As it seems there are several reasons why it’s not exactly a bed of roses, Dr. Jones.

First, the location. Guatemala really epitomises the term “Banana republic”. For most of the 20th century, the country suffered constant political turmoil. It was ruled by dictators and corrupt military juntas, the two changing places in endless coups. But the real power behind the throne was the American United Fruit Company, whose business activity in Central America was often referred to as capitalist imperialism. In 1954, freely elected president Jacobo Arbenz Guzman was overthrown in a coup staged by the CIA. Its director, Allen Dulles, and his brother John Foster Dulles, the U.S. Secretary of State, both had direct ties to the United Fruit Co. In the following decades U.S. military advisors trained and supervised the Guatemalan army and various paramilitary forces, which eventually became infamous “Death Squads”, responsible for massacres and the systematic abuse of human rights. During that time, many archaeological sites were completely plundered. The civil war ended 13 years ago, and the country’s young democracy is still unstable.

“It is still a bit dangerous out there. Just ten years ago our region was controlled by drug lords, arms traffickers and grave robbers. Archaeologists were sometimes shot at and had to flee. In 2001 there were at least 90 recorded assaults on tourists in neighbouring Tikal, which is, after all, a famous and frequented attraction, while our site in Nakum is more isolated in the jungle. Besides, some of our hired workers may well be ex-graverobbers, and they might always get tempted. The pectoral we found could easily fetch 100,000 dollars on the black market.”

Second, the territory and the jungle itself. The men must also be experts in Camel Trophy-type adventures.

“The nearest town where one can buy supplies is 80 kilometres away. After the rain, the unpaved jungle road turns into swamp. It takes 10 men to move an off-road vehicle that is stuck in the mud. And sometimes a second car must tow away the mules that are brought in to rescue the first vehicle. Once we had to evacuate the camp when the little river nearby flooded overnight. We had to flounder with a compass for miles, barefoot in muddy water that was full of slimy worms and leaches. And there were hordes of mosquitoes of course. I contracted leishmaniasis once. The protozoa simply ate my skin alive.”

One can hardly resist uttering Kurtz’s last words from Heart of Darkness: “The horror. The horror”.

Third, our scholars had to find their way through another jungle, which Indiana Jones with his crude approach would be totally lost in – a bureaucratic one.

“Prior to each season on the site, we must fill out countless forms, applications, affidavits, have them all translated, confirmed, copied, stamped, sent, rejected, returned, accepted and then denied by various committees. An excavation project usually lasts four or five years, and each year the same procedure has to be repeated”.

Fourth, the catastrophic financial situation of Polish academia in general.

“In the beginning, we managed to obtain some funds from our University and an American foundation, but it was not enough. Each year we had to spend our own money as well. God forbid if my wife ever found out! Our students had to pay for their own airplane tickets. We can only dream of the budgets our American counterparts have. Sadly enough, the Foundation for the Advancement of Mesoamerican Studies (FAMSI), which sponsored our first season, was affected by the recent crisis; our government grant also ends this year, and today we are in dire need of funds. We have made several interesting discoveries at the site over the past few seasons, but we simply ran out of money to pay the Guatemalan workers. These things still need to be properly documented and catalogued, if not fully excavated.”

So, dear potential sponsors: the fate of a most promising and pioneering archaeological project is in your hands. Our bold archaeologists prove that in real life they can cope with challenges worthy of your favourite silver screen hero. With one exception, perhaps: at least they do not have to fight the German army.

An exhibition chronicling the archaeologists adventures can be enjoyed this month at Galeria Camelot, ul. św. Tomasza 17 ( 3rd – 12th November). Meanwhile, the 14th European Maya Conference is being hosted by the Jagiellonian University from the 9th – 14th November.