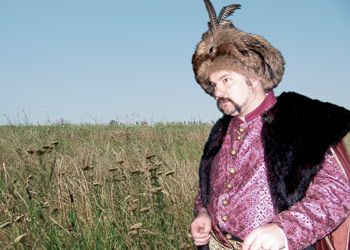 Piotr Krasnowolski: Being a hobbit, I need a hole. As the Dragon’s Den is not only taken but very much of the “dirty, wet hole, filled with the ends of worms” variety, I might gladly choose any comfortable hole in Kazimierz, preferably close to St. Catherine’s.

PK: That would obviously depend on the buying power of our treasury. Assuming that the title is hereditary, and with Krakow’s continued prosperity uppermost in Our Benevolent Mind, we’d have to make sure there’s gold aplenty for the future, with no (excessive) taxing of our subjects. As industry stinks, and agriculture’s too far out, we’d need to attract tourists and high technology.

Doing our short-term royal planning, we invite Magda Sroka, head of the Krakow Festival Office, and designate her Grand Royal Vizier responsible for the 2nd Feast at Wierzynek, this time involving Wentzl and neighbouring restaurants. It’s 700 years since the last one, and she’s sure to lure the great and the good from all over the globe – and impress in their minds the sanctity of the cause. The other leg, i.e. attracting and developing up-to-the-second technology, requires carrying a few coffers to the now Royal Krakow Technology Park, and investing a few others in the development of the good ol’ Jagiellonian. With their Vice-Rector for Development, Piotr Tworzewski, being a great visionary with feet solidly planted in maths and economy, they’ll be used well.

Long-term planning: following the Chinese saying, planning for life, we should teach people. As we used to be a teacher, we’d introduce a motivational element in the teachers’ salaries, even quadrupling the pay of the best, so that they don’t leave.

As far as our royal little pleasures are concerned: we might buy ourselves a vintage bicycle.

PK: The whole city’s worth exploring. Go to Podgórze by night, climb Krzemionki, walk past “Czwórka” and get the panorama of the city for the pensive spirit.

KP: And what, in this city, seems to represent a degree of overkill?

PK: Various architectural monstrosities that add quite a disagreeable sense of the macabre to any delirium, especially the businessman hangar-, supermarket-style multi-star hotels. Also the wild spread of those huge festering signposts, and quite obviously traffic jams. When the lights were down near Poczta and Novum, traffic moved much faster. Chłopskie Jadło, which is a total no-no unless you work and eat in the Nigerian sewers. Our enmity towards the constitutional capital… come to think of it, I fervently hope we don’t make war on the least attractive skyline in Christendom. High-voltage highlander tea, which may make the hairs on your lungs swell up but won’t ruffle them a quarter as much as slivovitz.

PK: The Unknown Drunk of Kaźmirz… (as slurring fellows call the district), right in the centre of Plac Wolnica. With a few convenient benches around for his faithful followers. Yet that is Kazimierz, not Krakow…

In Krakow: to Justus Decius so that our authorities and economists know who to look up to and learn from.

PK: Favourite places have the unfortunate tendency to close down – Alas! Ósmy Dzień Tygodnia’s gone – or change – like San Sebastian after the South African chef left. Galar will return to the bend of the Vistula in spring, and it is a place I absolutely adore. Definitely Alchemia, however fashion slave-invaded it may be, Plac Żydowski much rather than Szeroka, Słodki Wentzl and Wedel for the sweet tooth, the terrace of Manggha for the quality, peace, view, and excellent green tea.

PK: Blimey! I work most weekends. Certainly my Sunday escape is Dwunastka followed by a cuppa in the Main Market Square and a visit to a museum. When our daughter was younger, we used to show her all the treasures of Małopolska. Many, such as Lipowiec Castle and Stary Sącz, we visited many times.

KP: What’s a secret tip for staving off the Winter blues?

PK: I sleep more for sure. Other than that, consumption of nalewki (liqueurs): the infusions I make in summer and autumn in medicinal, though not homoeopathic, quantities with friends does the trick.

PK: Neither, I’m afraid. Unless you’ve loaded them with plenty of black pudding. Plus true Lisiecka Sausage from Pani Teresa downstairs!