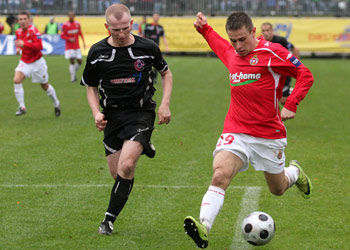 Ukraine will have to face tough inspections yet again by the European Football Association (UEFA) and the International Monetary Fund (IMF), who will be thoroughly checking the country’s preparations for EURO 2012. Ukraine is still far behind schedule and everything indicates that the majority of the problems involve corruption, fraud and “disappearing” money. If the announced inspection indeed were to draw the same conclusions, Michel Platini – president of UEFA – will start working towards a tournament where Poland will have six hosting cities, instead of the current four, with the final taking place in the Polish capital Warsaw, instead of Ukrainian capital Kiev. The IMF will in that case lay claim to all of the Ukrainian money dedicated to the preparation of EURO 2012. The inspections will be held from 4 to 8 November 2009.

But there is a lot of unrest in Poland as well. While the road to Euro 2012 seems to be going smoothly, the PZPN has become a target of major criticism after Poland failed to qualify for next year’s World Cup. The treatment of former head coach Leo Beenhakker, the behaviour by chairman Grzegorz Lato, who appeared drunk on national TV, and the lack of transparency in the selection of a new head coach, are all reasons why Polish football fans have signed petitions that request the departure of the current PZPN board. The petition will be handed to UEFA President Platini during his inspection of the EURO 2012 preparations.

On the football field, Wisła Krakow barely recovered from the blow it received from Lech Poznań a week before. Ruch Chorzów’s 1-0 away win in Bytom had clearly put the reigning champions under pressure, and at home against Piast Gliwice, Wisła faced a tough fight against the visitors. It wasn’t until the 75th minute that Wisła defender Marcelo scored the decisive 2-1 goal win. It was enough to hold a three-point lead over Ruch Chorzów in the Ekstraklasa table. Cracovia lost 1-0 away to Odra Wodzisław and is now teetering just one point clear of the relegation zone. Cracovia has a chance to avenge itself against Legia Warszawa in the final 16 round of the Polish Cup. Wisła Krakow had no problem with third division team MKS Bytovia Bytów and won 2-0, advancing to the quarterfinals.

In Formula One, Robert Kubica has already signed up for Renault F1 for next season, yet his future teammate is still unknown, although Renault did confirm that it will not be Heikki Kovalainen (now McLaren) or Jarno Trulli (now Toyota). The battle for Renault’s second seat will be between current test drivers Romain Grosjean (already Nelson Piquet Jr’s replacement), Timo Glock (now Toyota) and Kubica’s former teammate Nick Heidfeld. Willy Weber, manager of Nico Hulkenberg (this year’s GP2 champion) has confirmed a contract between his driver and the Williams F1 team, as well as that Rubens Barrichello (now Brawn GP) is joining the team, which would make a transfer of Nico Rosberg (now Williams) more and more probable.

Finally, Agnieszka Radwańska, Poland’s best tennis player and the world’s number ten, has failed to reach the WTA masters, where the year’s best players face off for the non-official world title. Radwańska was well on her way to the Masters, after reaching the finals in Beijing (China) and the semi-finals in Tokyo (Japan) and Linz (Austria). Yet a disastrous first round in the WTA Moscow Cup, which saw the Cracovian-born star lose to Maria Kirilenko, led her to miss out on the WTA Masters, although she is a first reserve for the tournament. This is the second time in a row that this has happened to Agnieszka Radwańska.