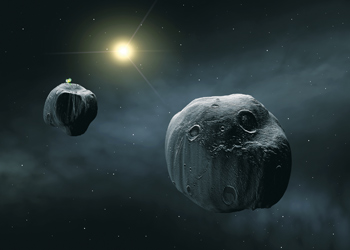 Six-year-old Kajetan Jałochowski, a first grader from Warsaw Elementary School number 205, has won a contest to name asteroid number 66189, and he has chosen the name “Live”.

The idea for the contest originated with Venezuelan scientist Orlando Naranjo, who discovered asteroid 66189 in 1998. As 2009 is World Astronomy Year, Naranjo decided that children should name a number of extraterrestrial objects that he had discovered. In Poland, the “Name Your Own Asteroid” competition, part of The Sky Above Warsaw campaign, was organized by the Copernicus Science Centre in Warsaw with the task of picking a Polish child to name one of Naranjo’s asteroids.

Aneta Prymaka from the Copernicus Science Centre told Gazeta Wyborcza, “The children not only had to think of a name, but also a story connected to it. They could do it in the form of a comic, a story, a film or a radio audition.” Out of 120 children who submitted their work, 20 were chosen for the final competition, and they also went on to participate in a live radio connection with the International Space Station.

Kajetan presented a short film in which he tells a story using a background, paper cut-outs, and music. The film is titled The Story of the Asteroid Live, and is about a rock that lives on a planet which is suddenly overwhelmed by gargantuan amounts of acid rain, forcing the rock to flee on the advice of an elder. The rock goes flying through space, becoming an asteroid, but becomes lost because he does not have a map. “Asteroids don’t have maps!” says Kajetan, the narrator. Eventually, the asteroid ends up in our solar system, where it orbits to this day. “We are very happy about that,” says the narrator. The film ends with the captions: Idea and Realisation: Kajetan Jałochowski, Assistants: Mum and Dad, Music: Little Hat Jones, “Bye, Bye, Baby”.

Kajetan said that making the film was a lot of fun, and that the biggest challenge was the narration. After being announced as the winner on Tuesday, he received a telescope, and perhaps he will put it to good use, for when he grows up he wants to “either save endangered species of snakes or become an astronaut”.

From now on, asteroid 66189, located about 500 million kilometres from Earth in the Lion galaxy, near Venus, will be know as the asteroid “Live” in official atlases.

The most interesting submissions for the competition are available for viewing on the Copernicus Science Centre’s website.

One of the jurors, Agata Nowicka, said that it is good that children got the opportunity to name asteroids because “they often approach questions concerning astronomy a lot more seriously than adults and are more creative”.

Jakub, a Warsaw middle school student who took part in the contest, is a perfect example of Nowicka’s opinion. He told Gazeta Wyborcza, “Recently, I myself have become interested in astronomy, the structure of the universe, why we are what we are, and where we are.” Those more philosophically minded often have a hard time finding other adults to talk to about the meaning of our existence. Adults might never think that middle school children share their ponderings.

Jakub, Kajetan, and the 18 other young scientists that took part in the final phase of the contest were also treated to a 10-minute long live radio connection with the International Space Station, in which an astronaut answered their most pressing questions about life in space from space.

The children wanted to know if the astronauts are able to sit down, if they eat with a knife and fork, how they wash their hair, do laundry, if they come back to earth younger, how they tell the difference between day and night, and if they see the Great Wall of China. Those sound like simple, elementary, perhaps childish questions, but actually many well-informed adults would struggle to answer them. Luckily, an astronaut was on hand.

One of the astronauts explained that they don’t use plates because their food would fly away, that they regulate day and night time themselves by turning the lights on and off, and that in space they use special exercise equipment to prevent the weakening of muscles and bones due to constant floating.

Before the radio connection, the young participants were informed about the space station’s position and other data. They heard that the astronauts were above Australia, moving at a speed of eight kilometres per hour, and orbiting the earth every 1.5 hours.

The radio connection with the space station was the 500th such connection in the world organized by NASA and the European Space Agency, but it was only the second one in Poland.

Congratulations to Kajetan and his colleagues!