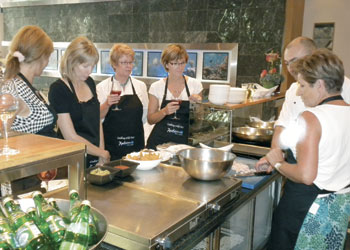 Krakow Post: When did IWAK begin, and what was the main idea behind it?

Teresa Klimczyk: IWAK’s roots go back to 1994 when two ladies ran into each other outside a bakery in Wola. One of them, Melissa Juszyński, approached the other having noticed her U.S. number plates. Over a coffee – which is how so many great relationships begin – they discovered that they were both expats and new to the city. They began wondering if they were just a phenomenon, or perhaps Krakow was host to other women in a similar situation. Melissa had previously lived in Warsaw, where she had belonged to the International Women’s Association there and so they both decided to form a similar group in Krakow.

The following year, the other lady of the duo, Sue Mleczko, was involved in the first group effort to put together an informational booklet for expat newcomers to Krakow. The booklet contained basic tips for expats, including hair salon recommendations, a guide to good restaurants, transportation and shopping advice, to name but a few of its valuable contents.

This kind of information is widely available today, both on the Internet and in all good bookstores. Yet at the time, such a guidebook could almost have been viewed as a survival guide!

Sue Mleczko still lives in Krakow and runs a garden nursery with her husband. She was made an honorary member of IWAK, having put so much work and effort into helping form what is essentially a support network for expats – based on friendship and fun. All the things in fact, that an expat craves in his or her new home abroad!

KP: How many members does the organisation have now?

TK: IWAK’s membership base varies from month-to-month and year-to-year, as many families move on to pastures new when the husband’s contract expires and he is posted elsewhere. On the whole though, our membership base totals over 100+ ladies.

KP: What are some of the activities the group is involved in around the community?

TK: IWAK’s charity group is very active in working with other NGOs helping to sponsor projects amongst those less privileged. The organisation hosts two main charity events each year, one being the International Garden Party and the other the Christmas Charity Ball. In the past, proceeds from these events have funded renovations in children’s homes, therapy equipment, computers, specialist beds and animal shelters.

IWAK members often get involved in giving English lessons in schools and foster families, as well as running small community-based businesses such as therapy workshops, translation work and volunteer services.

KP: What advice would you give to women who have just moved to Krakow from abroad?

TK: Krakow is such a wonderful city to live in. Yet despite its beauty and charm, the very fact that many visitors and newcomers don’t often speak Polish means that communication can be a huge problem. Take the main post office for instance – not a single sign in English to explain which counter we should be standing at or what on earth the word awiso means (notification of registered post). Our advice to women moving to Krakow would be not to despair! Cracovians are very warm and friendly people and even if the lady behind the counter in the post office mutters a grumpy, non-coherent response in answer to your question about stamps to Kathmandu, there is always a friendly face somewhere to help in times of utter desperation.

Of course, there’s always IWAK for a host of ladies who’ve been there, got the t-shirt and in all likelihood, are still going through the motions of finding their feet here (not to mention those confounded stamps!).