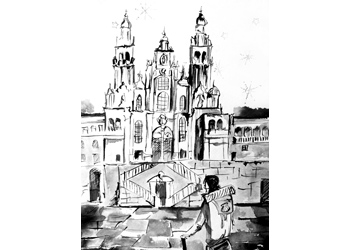 Today, one can observe the revival of the medieval tradition of the Way of Saint James, a famous pilgrimage route, and Poland is one of the countries (along with Spain, Portugal, France, Germany, Austria and Switzerland) where old routes have recently been revived. This summer, a new part of the Saint James’ Way that goes through Małopolska, leading from Sandomierz to Krakow, was opened. During a mass in the Dominican Church of Saint James in Sandomierz, which preceded the official opening of the route, the superior of the monastery, Father Wojciech Krok, preached: “It is not only the physical, but a certain spiritual path that we have to travel that is a part of our life. The pilgrimage to Santiago has the elements of a spiritual path.”

The Saint James’ Way was created in medieval times and has survived without major changes until today. It has run across almost all of Europe, but all of the different routes lead to the medieval city of Santiago de Compostela, situated in northwestern Spain. According to legend, the body of Saint James, one of the three most important apostles, was transported there by boat from Jerusalem and is said to be buried under what is now the Cathedral of Santiago de Compostela.

The largest pilgrimage movement on the route took place from the 12th until the 14th century, when the Pope’s Act recognized Santiago as the third holiest place for Christianity, after Jerusalem and Rome.

In the past, the pilgrimages had above all a religious character aimed at the reinforcement of faith, doing penance, fulfilling one’s vow, and earning plenary indulgences. It was also an important factor in the development of civilisation at the time, and it played a part in creating cultural unity in Europe, as it enabled the transfer and exchange of goods and technical solutions. However, after the French Revolution, the pilgrimages lost popularity and it wasn’t until the 1980s that the route once again began to attract people from different parts of the world.

The late Pope John Paul II contributed to this during his visit to Santiago in 1982, when he announced the European Act, seen by many as the ideological basis for the unification of Europe. The route was declared a UNESCO World Heritage Site in 1993.

The first section of the Polish route was reconstructed in July 2005, and it became the Lower Silesian part of the Saint James’ Way. The event was followed by route openings in several other voivodships, as well as plans to reconstruct the route in other parts of the country.

The Saint James’ Way is intended both for individual pilgrims (peregrinos) or small groups; anyone, irrespective of their creed or nationality, who wants to experience a spiritual journey on their way to the sanctuary. Stories and accounts of different people who have made this unusual journey (Camino) say that the magic of it does not allow the experience to be easily forgotten, and some have compared it to a drug: those who make the journey once, tend to long for it and return after some time.

“When on a pilgrimage a man begins to pay attention to the things that surround him. He becomes more open to contact with people and apart from linguistic and cultural barriers, he finds a friend in everyone,” writes Renata Zając, one of the participants of Camino del Norte in 2008, on the website dedicated to that pilgrimage.

Each day the pilgrims travel across approximately 20 kilometres and the difficulties they encounter include high temperatures, long distances from one hostel (alberque) to another or from one town to another, and the burden of carrying heavy luggage. However, two magical words – “Buen Camino” (“Good journey”) or “Ultreia” (“Walk on”) – the traditional greetings of Spanish pilgrims, are something that sweetens the way, raises spirits and adds willpower. The Spanish like to describe the pilgrims in a joking way: los desperados (the desperate), which according to Renata Zając characterises those who make the journey quite accurately.

“The Way of Saint James is a contemporary, but positive Tower of Babel, in which nationalities, languages and religions mix. It does not matter who you are – it is important that you go in the same direction, along the same path,” writes another pilgrim, Katarzyna Bednarz, who travelled across Camino de France in 2004. “Diversity becomes unity, since the curiosity of another man, who is different than you and thinks in a different way, makes us want to talk, meet, ask questions or simply go side by side in silence.”

Symbols of the pilgrimage, such as characteristic white shells, are scattered in different places throughout the old continent and mark the route. On the way to Santiago the pilgrims collect stamps in hostels, cafes, shops, museums and churches, which are put in a pilgrim’s passport – credencial del peregrino. For some people the journey does not end in Santiago de Compostela, and they continue for a few dozen kilometres, to the coast of the Atlantic Ocean and a spot called Fisterra, which in ancient and medieval times was considered the end of the world.

Interest in the Way is increasing and people who have recently made the journey are helping to create it. A special forum designated for Polish pilgrims testifies to this. It is a good way to exchange opinions, find a person that will accompany you when travelling and to search for information.

Anyone who finds in him or herself a bit of determination and a spirit of adventure is welcome to walk on, as the Spanish say. It does not matter who you are and where you are from – Buen Camino!