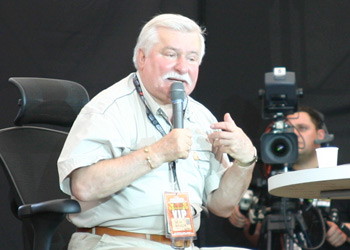 In a recent interview on radio station RMF FM, Bronisław Komorowski, the speaker of Poland’s parliament, said that he believes Lech Wałęsa would be a good candidate for EU president.

Komorowski said, “That is an idea, show the world that we have a serious candidate.” He added that Wałęsa would, of course, have to agree to become a candidate. He also said that chances are slim since Jerzy Buzek is already the head of the European Parliament, and Poland can’t want too much at once.

Wałęsa later addressed the question of his candidacy for Europe’s highest post. Also speaking on RMF, he said, “If I knew languages, nobody would stop me. There [in the EU], knowledge of languages is necessary. But I am not capable of learning [languages]. Always being with a translator – that’s not too good. From this point of view I am not good for the job.”

Previously, Britain’s Tony Blair had been the frontrunner for the EU’s presidency, but he did not receive backing from important member states nor from the socialist fraction of the European Parliament. In addition, smaller countries were afraid that such a high-profile candidate would not take their views into consideration. Poland also expressed its hesitancy for a high-profile candidate.

So, who would Poles support for the new post? According to a GfK Polonia poll done for Rzeczpospolita, 28 percent of Poles would support Germany’s Angela Merkel.

Jerzy Buzek has expressed his support for a female candidate, saying that, “We should consider nominating a woman for this position. The symbolism of such a decision would be enormous.”

While speaking on RMF, Wałęsa also addressed the question of his possible candidacy for Poland’s presidency. Recently, he aroused interest by saying he might run for president. However, he now said that he will not be running.

Meanwhile, German Deutsche Welle reports that Wałęsa is to take part in celebrations commemorating the 20th anniversary of the fall of the Berlin Wall on 9 November in Berlin, where he will strike down the first out of a two kilometre long chain of dominoes that will eventually knock down the wall.

Whether it is rumours of running for the EU’s or Poland’s presidency, knocking down the Berlin wall, or being accused of collaborating with the communist secret police, Lech Wałęsa continues to be in the media spotlight.