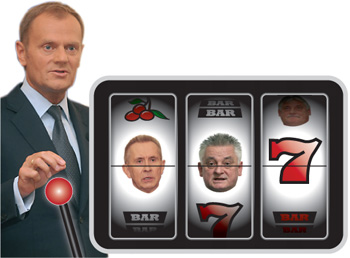 Although leaves are generally expected to fall in October, the downfall of half a government’s cabinet might be seen as rather alarming in a conventional, modern-day democracy. Yet this autumn, Prime Minister Donald Tusk decided that the parliamentary tree needed more than a good shake. The last few weeks have seen a string of dismissals and resignations, with a shower of “rotten fruit” thudding to the ground. That a prime minister can appear quite comfortable amid a scandal involving a cabinet minister, a gambling entrepreneur with a past conviction for bribery, private meetings at petrol stations and cemeteries in remote locations and tapes of explicit (and expletive-heavy) conversations on gambling tax cuts that could allegedly cost the state 500 million złoty a year in forgone revenues, is also remarkable.

One explanation, of course, is that the appearance of comfort is just that – an appearance. After two years in office, Prime Minister Tusk continues to enjoy stellar poll ratings, but as his predecessors have found, this is when support starts to evaporate: Tusk’s nemesis, Jarosław Kaczyński of the Law and Justice (PiS) party, had to call early elections in 2007, two years into the parliamentary term, when his deputy prime minister and chief coalition partner was arrested for bribery. The previous government of reformed communists, the Democratic Left Alliance (SLD), was rocked by a parliamentary investigation into corruption in 2003, two years after being voted into office. Scandals also seemed to sap life out of earlier governments half-way through their four-year terms – in 1999 and 1995.

If Tusk is to break this “curse of the third year”, and most commentators expect him to, he may owe it in large part to his popularity with the media. Rather like the Democrats in the U.S., Tusk’s Civic Platform (PO) sweeps the stakes among the country’s elites, leaving PiS – Republican-style – to court niche, often religious-based audiences. But the bias does not explain everything: where Kaczyński is unphotogenic, mumbling and often aggressive, the media-savvy Tusk is famed for his easy charm.

Another, not altogether unrelated, reason is Tusk’s reaction to the release of wiretaps showing the chairman of the PO’s parliamentary caucus, Zbigniew Chlebowski, and Sport Minister Mirosław Drzewiecki on unexpectedly chummy terms with an owner of a chain of “one-armed bandits” (slot machines). That Chlebowski arranged to meet the businessman, previously convicted for greasing palms, at a remote cemetery, did not help his cause, and Justice Minister Andrzej Czuma, whose initial reaction was to claim that “without a doubt” no crime had been committed, also stepped down to avoid “appearance of bias”. Adam Szejnfeld, whose own lobbying for a lower rate of gambling tax has not been shown to be improper, “offered to resign” as deputy economy minister until the case is resolved, despite Tusk’s reassurance that his record remains spotless.

But these four were not the only victims. Tusk went on the offensive, announcing the move of Deputy Prime Minister Grzegorz Schetyna to head the parliamentary caucus, accompanied by three of the prime minister’s closest aides – Paweł Gras, Rafał Grupiński and Sławomir Nowak.

Pundits remained divided on the darker motives for Schetyna’s demotion – is there something we don’t know about his role in the scandal? Or did the prime minister use his colleague’s’ indiscretion to weaken a potential rival thought to run half the government business from the home affairs ministry? Or did PO really decide to deploy its most skilful players to parliament, where an investigation will now be launched into the scandal? Whatever the motives, it worked, diverting attention from the sleaze within the government.

Thanks to the wider reshuffle, Tusk regained the initiative – with Schetyna’s move, this was no longer just a purge forced on him by circumstances. The offences of Chlebowski and Drzewiecki paled alongside the virtuosity of their colleagues who had willingly sacrificed their positions on the altar of “standards” in a bid to retain voters’ “trust” – both talisman words that the prime minister deployed repeatedly.

So all is well and good – a localised threat to good governance contained, trust restored thanks to swift action by the leadership amid an all-party agreement to clarify any issues that may remain via a special investigative committee in parliament, and above all – punishment meted out to the culprits. And, you might think, awards to the Central Anti-corruption Bureau (CBA) who have uncovered the scandal. Well, not quite.

The one cloud marring the idyllic picture that emerged from the prime minister’s take on the affair was that he had “lost trust” (that word again) in Mariusz Kamiński, the CBA chief, whose resumé includes a spell as a PiS parliamentarian. This “party activist”, rather than cop, is now accused of setting up a trap for the prime minister during their August meeting. According to Tusk, the CBA head said at the time that there were no grounds for any criminal prosecutions, only to leak the damaging material to the press, thus giving the appearance of an attempted cover-up on the part of the prime minister.

As a result, the prime minister dismissed Kamiński, replacing him with a well-respected police boss of no obvious political affiliation. But Tusk did not wait for the president’s opinion on the dismissal, as required by the relevant law, saying Lech Kaczyński’s televised critique of the moves to replace the head of the CBA constituted an opinion – a negative one. This could, some lawyers believe, lead to the prosecution of Tusk at some future time. For now, he continues to cast a spell over the electorate, despite the risk that his move against Kamiński would appear vindictive. Indeed, Tusk’s opponents appeared to weaken their case by fresh leaks of CBA wiretaps.

One of the government’s most visible defeats has been its failure to prevent the bankruptcy of the Polish shipbuilding industry and to find a buyer for whatever remains of the defunct yards. A not-quite-identified investor from Qatar won a tender for the assets, only to miss two deadlines to pay for the purchase. In the days after Kamiński’s sacking, tapes were leaked allegedly showing a fresh case of corruption uncovered by the CBA: the Qataris received unduly favourable treatment in the tenders. But the “scandal” here seems manufactured: the recorded conversations show a government keen to sell the yards to the Qatari investor, but no evidence of favouritism, since there were no other bidders. The leaking of the tapes looks like the CBA indulged in a bit of vindictiveness of its own – undermining the belief that Kamiński had no political agenda in attacking cabinet ministers over the gambling affair.

For now at least, the odds are that Tusk will break the curse of the third year in power. Though who would want to gamble on that, in the present climate?