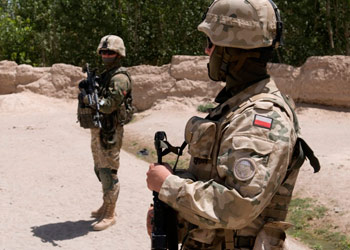 The U.S. Ambassador to Poland, Lee Feinstein, has been caught up in diplomatic controversy after his comments on Polish TV station TVN24 on 24 October.

In an interview on that station, the ambassador responded to a question about the presence of Polish soldiers in Afghanistan. His answer was translated live into Polish by TVN24 as: “The president and prime minister declared that not only would they be keeping Polish soldiers in Afghanistan, but they would also enlarge the contingent. This is something for which we are very grateful.”

After the ambassador’s comment was quoted in nearly every Polish newspaper, Poland’s National Defence Minister Bogdan Klich denied Feinstein’s claims. Klich said, “The ambassador committed a blunder, since neither the prime minister, nor the minister of foreign affairs, nor the minister of national defence made any declarations to the American side about an increase in the contingent. But, please remember that these are the ambassador’s first days at a new post.”

However, the confusion reached another level when Feinstein’s statement was quoted by the Washington Times in the U.S. That prompted the U.S. Department of State to claim that the ambassador was mistranslated by TVN24. The Department of State stated that Feinstein never said that the Polish government promised to send more troops to Afghanistan, but that Polish officials plan to “enhance their presence” in Afghanistan.

TVN24 has since corrected the translation, but its spokesman Karol Smoląg claimed that the station does not feel responsible for the mistranslation. He said, “We maintain that the translation precisely evoked the spirit of the ambassador’s statement on our station, although the translator needlessly added the word ‘soldiers’, which did not appear directly in the ambassador’s statement.” He added, “Taking into consideration that the ambassador used the formulation ‘actually to enhance its presence’ as an answer to a question about the presence of our soldiers in Afghanistan, putting responsibility for the whole confusion on us is a misunderstanding.”

Maciej Wierzyńki (interviewer): Since we are talking about Afghanistan, surely you know, that in Poland support for the presence of Polish soldiers in Afghanistan is weakening. Some politicians openly call for the withdrawal of Polish forces. How would you answer such concerns?

Lee A. Feinstein: That is a great question, really it is a problem not only in Poland but in the United States as well. In the States public support for exposing people to danger is always a delicate issue. Therefore, I want to say a few things about this. First – The United States is determined to stay in Afghanistan and there should be no doubts about this. The president, as you surely know, is considering various options in Afghanistan – more precisely how to go forward with the mission. One thing is beyond the discussion – withdrawal. The president is resolved to stay in Afghanistan and win. I hope that this gives some certainty, of course it is a tough battle, we are grateful to the Polish prime minister and president for their commitment to be in Afghanistan, actually, to enhance their presence in Afghanistan. We are very grateful to Poles for their shared sacrifice.