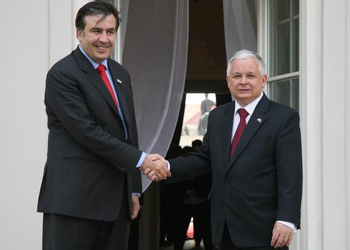 The Polish president’s website has announced that Georgian President Mikheil Saakashvili will arrive in Warsaw this afternoon for a one day visit. He will meet with Prime Minister Donald Tusk and President Lech Kaczyński.

The leaders are to discuss EU-Georgian cooperation, the internal situation in Georgia, specifically regarding Abkhazia and South Ossetia, as well as the Southern Caucus region, including the recent Turkish-Armenian thaw.

The Polish president’s website states, “The Georgian president’s visit will serve to strengthen the Polish-Georgian partnership, as well as to express [Poland’s] support for Georgia’s sovereignty and territorial integrity.”

While in Warsaw, Saakashvili will also visit the grave of Father Jerzy Popiełuszko. Popiełuszko was a priest murdered by the communist secret police in 1984, and October 19 was the 25th anniversary of his death.

Saakashvili’s last visit in Warsaw was in April.