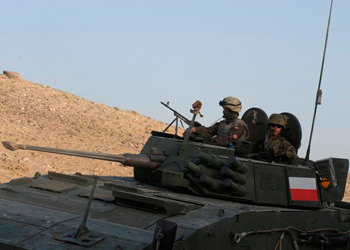 Poland is to send 600 more troops to Afghanistan. A military source told Gazeta Wyborcza that the U.S. is pressing its allies to increase the number of troops, and Poland is to have 2,600 in Afghanistan this spring.

The source revealed that Poland’s current mission ends on 13 April, but the U.S. commander in Afghanistan, Stanley McChrystal, wants the number of allied troops to increase by 10 percent, or about 40,000. The source added that 2,600 troops, with 200 in strategic reserve, is the limit of Poland’s current capabilities, and there will already be difficulties with gathering the extra 600.

General Waldemar Skrzypczak, the former commander of Poland’s land forces, told Wyborcza, “The Americans are pressing for an increase because they consider our province of Ghazni as their ‘rear’. They don’t want the Taliban escaping to Ghazni and gathering strength there as they escape the U.S. offensive.”

NATO is also urging allied countries to increase their deployment, but wants more civilians in Afghanistan as well. That is why a part of Poland’s additional 600 troops are to be civilians. General Egon Ramms, the commander of NATO combined forces in Brunssum, Holland, told Wyborcza, “We need your specialists in economy, agriculture, industry, construction. Because we won’t win this operation with the army alone.”

In the lead up to elections in Afghanistan this summer, the Taliban intensified its attacks. As the number of Polish soldiers lost in combat since 2002 has increased to 14, the political and public debate on whether Poland should send more troops picked up. But now, after relations with the U.S. were evidently repaired by U.S. Vice President Joe Biden’s visit earlier this week, Poland seems willing to cooperate closely in Afghanistan again.

So far, the only other country that plans on sending more troops to Afghanistan is Great Britain, with Gordon Brown recently pledging to increase G.B.’s contingent of about 9,000 by 500. Meanwhile, Australia is to withdraw its 1500 troops. The U.S. has over 60,000 troops in Afghanistan.