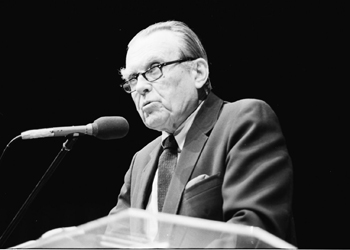 Czesław Miłosz, famed Polish poet, prose writer and translator and Nobel laureate, has an interesting history with the city of Krakow. After 1989, Miłosz spent part of his time in his apartment in Krakow, when he wasn’t at his Berkeley home. He died in his Krakow home in 2004, at the age of 93.

And now, five years after his death he will be honoured in Krakow at the inaugural Czesław Miłosz Literary Festival, organised by the Book Institute. Even the festival’s theme this year, “The Captive Mind”, is an allusion to the great writer. The four-day festival will feature readings, panel discussions, film screenings, meetings with authors and poets, and several other accompanying events.

Though this is the first year of the festival, the organisers managed to invite a score of prestigious figures from the literary world, including fellow Polish Nobel laureate Wisława Szymborska, Seamus Heaney, Derek Walcott, and many others, both established as well as those from the younger generation. All of the events will be taking place at the Tempel Synagogue and the St. Catherine’s Church, the Stary Theater and the Jagiellonian University’s Auditorium Maximum, the Manggha Centre and Alchemia.

The festival begins today and will last through Monday, 26 October. More details and a full schedule can be found at the festival’s official website.