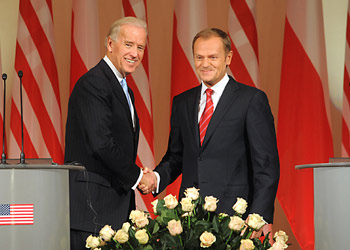 U.S. Vice President Joe Biden has concluded his visit in Poland. After arriving in Warsaw Tuesday night, he met with Prime Minister Donald Tusk and President Lech Kaczyński on Wednesday to talk about the newly proposed missile defence system, but also about other security issues and U.S.-Polish cooperation. The visit was full of optimism and smiles.

After meeting for lunch, Biden and Tusk took part in a press conference, in which Biden said as many nice things about Poland as possible, while also accidentally calling Tusk “Mr. President.” Exerts from the press conference demonstrate how much Biden wanted to soothe U.S.-Polish relations after U.S. President Barack Obama scrapped the previous missile defence agreement:

“…I would also point out that we take not only our mutual commitments seriously, but I take it very, very seriously. President Obama and I consider this to be a solemn obligation.”

He also spoke about the deep historical ties between the U.S. and Poland, and pointed out the sacrifice of Polish soldiers in Iraq, Afghanistan, and the Balkans.

But the most important topic was the missile defence plan, of course. In this regard, Biden described the Obama administration’s new plan as a “phased adaptive approach to missile defence,” and said that it will cover Europe more efficiently than the previous system proposed by the Bush administration.

The two leaders also confirmed the declaration on defence strategy signed by Poland and the U.S. last year, and said that the two countries will work together on energy security.

Biden concluded the press conference by thanking Tusk for the hospitality, and saying, “I just want you to know, Mr. Prime Minister, that hospitality is waiting for you and your colleagues in America.”

In the afternoon Biden met with Kaczyński privately for over two hours. Afterwards, Biden told reporter that it takes a while to catch up “when two old friends get together,” and that they probably would have talked even longer if it wasn’t for their tight schedules.

Biden assured Kaczyński that Poland is the U.S.’s “authentic partner,” and their meeting also focused on Poland’s role within the new missile defence plan, although Kaczyński said afterwards that they also talked about U.S. troops being stationed in Poland along with U.S. Patriot missiles. He said, “The conversation filled me with optimism.”

So, overall there were no surprises. Biden wanted to relieve the tension between Poland and the U.S., and to offer Poland a key role in the new missile defence plan. Judging by the smiles on Polish leaders’ faces and their willingness to take an active role in the new system, he succeeded.

Polish Minister of Foreign Affairs Radosław Sikorski, appearing on the television station TVP1, was also satisfied with Biden’s visit. According to him, the visit was “more than just touchy words,” as it laid the foundations for close U.S.-Polish cooperation within the new missile defence system, which he believes, like Biden, to be better than the previous one because it will defend more of Europe. Sikorski said that after Biden’s visit “Poland is in the game again.”

Aside from meeting with Polish leaders, Biden visited the Heroes of the

One thought on “Everyone Happy After Biden Visit”