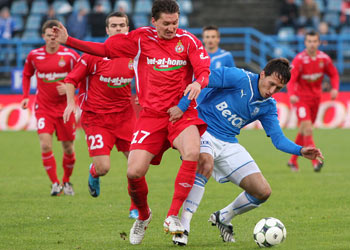 Robert Lewandowski has brought the Wisła domination in the Ekstraklasa to an end. With Lewandowski scoring the only goal, he personally revamped the Polish league, leading Lech Poznań to a home win against table leaders Wisła Krakow. Ruch Chorzów defeated Lechia Gdańsk (1-0) and reduced the deficit to Wisła to only three points.

In general, it was a bad day for Cracovian football. Cracow’s second team Cracovia lost at home against Polonia Bytom (1-2). Zagłębie Lubin and Jagiellonia Białystok played an authentic relegation game which resulted in a goalless draw.

But the biggest disappointment was to be found in Gliwice, where the local team Piast kept Legia to a 1-1 draw as well. Falling into constant errors, dropping points along the way, rumours are spreading that Legia is to sack their coach Jan Urban. It also has put the current Legia leadsman at the top of the list of candidates for becoming the next Polish national coach.

PZPN Vice President Jerzy Engel that the new coach will be announced before 3 November and has “four Polish candidates and some foreigners” to hold into consideration. This, despite the fact that the Polish football association stated earlier that the next head coach will be of Polish descent again.