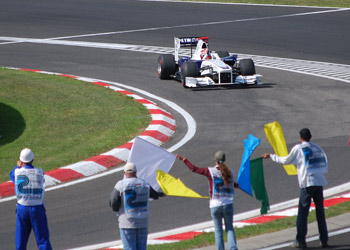 Jenson Button (Brawn GP) is the new world champion in Formula One. A spectacular race in Brazil decided one of the weirdest seasons in Formula One ever. Robert Kubica (BMW Sauber) was alert at the start, had a good first stint and a well executed first pit stop. All this brought the Krakow-born driver in second place, which he managed to hold until the finish. The race itself was won by Mark Webber (Red Bull Racing). Jenson Button had an impressive race advancing from fourteenth to fifth place, which was enough for the world title after teammate and fellow title contender Rubens Barrichello suffered a puncture in the final laps of the race, which threw the pole-sitter back.

Chaotic start
The opening lap was a chaotic one. In the first corner Heikki Kovalainen (McLaren) spun with Giancarlo Fisichella (Ferrari) nearly missing him. A few yards further, the other Ferrari of Kimi Raikkonen was almost forced off the track by Mark Webber. The two cars touched and the Ferrari lost its front wing. Another corner further on the track, Jarno Trulli (Toyota) tried to overtake Adrian Sutil (Force India) from the outside of the nearing corner, in a battle for third place. Trulli’s evasive manoeuvres were in vain as he lost control of the car, touching Sutil along the way, who bounced off the track and when the car rolled uncontrollably back onto the track, Fernando Alonso (Renault) crashed into the wreck.

Trulli, Sutil and Alonso were out, but the two Finns, Raikkonen and Kovalainen, managed to reach the pit lane. Kovalainen drove away too abruptly, taking the fuel hose with him. The fuel still pored out of the hose, spraying all over Raikkonen’s Ferrari, which caught fire for a brief moment. Raikkonen, nicknamed the “Ice Man” for staying cool under every circumstance, kept the Ferrari rolling and managed to finish the race in sixth, still taking three points.

Impressive advance
This all happened far behind race leaders Rubens Barrichello, Mark Webber and Robert Kubica, who all of a sudden found himself in third place. Barrichello did not manage to pull a gap before stopping at the box for the first time. Then, the Brazilian driving for his home crowd was caught in traffic. Webber and Kubica managed to come out ahead of Barrichello after their first stops. The advance of Kubica’s teammate Nick Heidfeld abruptly came to a halt, when the second BMW Sauber driver did make a pit stop, but the crew forgot to put fuel in the car. 300 metres after exiting the box the car came to a standstill. Kubica seemed surprised at his remarkable achievement: “I had to reduce the engine revs after about 15 laps, because the water temperature was too high, and I had to avoid the tow of the guys in front of me. But I was surprised that, despite all that, I managed to keep up the pace and finish second. A great result for the team; we’ve had a difficult year, but this performance is well deserved.” Because of the second place, Kubica overtook teammate Heidfeld in the overall standings in the championship.

In the back of the pack Jenson Button and Sebastian Vettel (Red Bull Racing) managed to undo their terrible qualifying performances (14th and 16th, respectively) by rapidly slicing through the pack in true title contender fashion. Only début racer Kamui Kobayashi (Toyota) managed to hold up the future world champion, with some spectacular attempts to overtake the Japanese Toyota racer as a consequence. The exiting world champion Lewis Hamilton (McLaren) showed one last time why he was last year’s champion: a perfect race got him from seventeenth onto the podium.

After the second series of stops, little had changed. Sebastian Vettel outmanoeuvred Jenson Button in the pit lane and Rubens Barrichello had to come in for a third stop after suffering a puncture. It decided the world championship. Webber came in first, with Kubica finishing second. Lewis Hamilton took third place, while Sebastian Vettel came in fourth, one place before Jenson Button. Vettel’s fourth place was not enough to keep his title aspirations alive, but it was enough to overtake Barrichello in the overall standings with only one race to go. Aditionally, Brawn GP also took the constructor’s title. The last race of the season is in Abu Dhabi (United Arab Emirates) on 1 November.