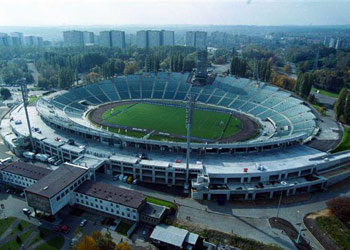 In the first snow of this fall/winter Poland produced a shameful display on the football pitch of the Sląski Stadium in Chorzów. An early own goal by Seweryn Gancarczyk (Lech Poznań) was not followed by a counter-offensive. All in all, the already-eliminated Poles clearly were not motivated, whereas Slovakia was qualified with figures displayed on the scoreboard.

It is the first time in their history that Slovakia has qualified for a major tournament. Slovenia managed to keep second place thanks to a 3-0 away win against San Marino in advance of the play-offs. The goalless draw between the Czech Republic and Northern Ireland was of no influence anymore to the group standings.

In need of quality and experience

Interim coach Stefan Majewski clearly experimented with some players low on experience. While currently coming up short in technique, tactics and pace, the road to Euro 2012 is still long and with that in mind, Majewski clearly wants to see a lot of the players gain experience on a higher level. Attacker Sławomir Peszko (Lech Poznań) agrees: “We are in need of some age, experience and quality. This is a young group that needs guidance.” Yesterday, goalie Jerzy Dudek (Real Madrid, Spa.) and captain Mariusz Lewandowski (Shakhtar Donetsk, Ukr.) were the only two players above the age of 30 that have played abroad.

With Marcin Wasilewski (Anderlecht, Bel.) and Michał Żewłakow (Olympiakos, Gre.) out, the Polish defence is in shambles. Poland’s midfielders are already remarkably better, but lack a decisive attacking midfielder: Roger Guerreiro (AEK Athens, Gre.) has not been the attacking midfielder Poland was looking for after all and other options still lack experience and thus far have fallen short, such as Maciej Iwański (Legia Warszawa) and Sławomir Peszko. Attackers or strikers can only score if the ball gets up front and as long as that doesn’t happen, even talented strikers such as Paweł Brożek (Wisła Krakow), Robert Lewandowski (Lech Poznań) and Ireneusz Jeleń (Auxerre, Fra.) are not able to make a difference.

So, the task ahead for the new head coach is clear: to find more balance in the team, preferably through some age and experience. But who that new coach is going to be, is still unclear. According to rumours, Alberto Zaccheroni has received but declined an offer made by the Polish Football Association (PZPN). The Italian coach has been without a club for over two years, yet is known as one of the few Italian coaches to play according to the attacking and attractive 3-4-3 system. It gave him great successes with Udinese and AC Milan in the late nineties, but failed to impress with later teams Lazio Roma, Internazionale and Torino. PZPN has neither confirmed nor denied the candidacy of the 53-year-old Italian, but has stated that the next head coach will be “someone from Poland”. This, despite open applications made by Avram Grant (ex-Chelsea) and Lothar Matthäus (ex-Salzburg, ex-Hungary, currently at Maccabi Netanya, Isr.).

But the question is, who is to blame for Poland not qualifying? Some people say it is a shortage in quality on the pitch, others say the good atmosphere between the squad and former head coach Leo Beenhakker was completely gone. A couple of fans lost faith in PZPN and wrote an open letter to UEFA and FIFA, to “please take care of this corrupt football association” after over 300 court cases have been brought against corrupt referees, coaches, officials and team managers.

Poland might be out, but the 2010 World Cup in South Africa is a global event attracting all football-loving people worldwide, no matter who qualifies. For Honduras and Slovakia it will be the first time on the highest platform of football. And while Poland is focusing on Euro 2012, the following teams are setting their sights on next year’s World Cup, or still have a chance to make it to the tournament through play-offs, with the decisive rounds taking place on 14 and 18 November.