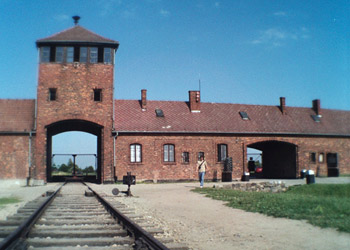 “Let’s face it, there has been a history in Poland of right-wing Catholicism, which has been deeply disturbing for those of us who know a little history, and remember which side of the border Auschwitz was on,” Stephen Fry said in a Channel 4 News interview. Though the comment was made within a context of criticism of Polish right-wing parties, not surprisingly, it quickly created an uproar amongst Polish politicians and media.

In addition to insinuating that Poland had a role to play in the creation of the Auschwitz concentration camp, the comment is just plain incorrect. By the camp’s founding in 1940, the town of Oświęcim had been annexed by Nazi Germany, and the renamed towns of Auschwitz and Birkenau, the sites of the camps, were within the borders of the Third Reich. Though the camp is best remembered for the millions of Jews who died there after 1941, it is important to note that the camp’s initial victims were Polish resistance fighters and other political prisoners.

The Polish Embassy in London quickly released a statement in response, which stated: “To suggest, even indirectly, that the Polish people and Poland as a country are in some form collectively responsible for the infamous death camp, which became the symbol of the horrors of the Holocaust, is completely wrong and defamatory.”

The British actor and writer has since apologised, stating on his Twitter: “I’m first [to] admit I could have expressed it better. But [please] believe I have nothing but respect & fondness for the Polish people.”