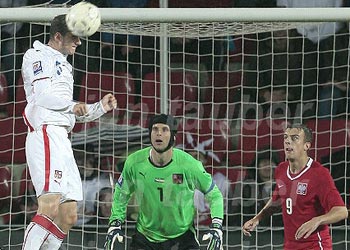 It was the first time since June 1997 (vs. Georgia, 4-1 win) that a Polish national football team appeared with all of its defenders coming from the domestic league. Coach Stefan Majewski argued that it was the way to really line up players eager to play for their own country.

However, the outcome proved to be disastrous. The Czech Republic was much stronger than Poland. The Poles were able to hold out for one half, but the second 45 minutes were decisively advantageous for the home playing Czechs. By the hand of Tomas Rosicky of Arsenal and striker Tomas Necid (CSKA Moscow) who substituted Michal Papadopoulos (SC Heerenveen), the Czechs stormed over a technically and tactically incapable Poland. When in possession, the Poles’ play was simply too slow to threaten the Czech defence in Prague.

Tomas Necid opened the score in the 51st minute, and a nice attack over the right side from the pitch in the 72nd minute resulted in a the decisive 2-0 scored by the head of Jaroslav Plasil. But the best way to reflect the score is with statistics: Tomas Rosicky, as central attacking midfielder, spent 78 minutes on the pitch, delivering 30 passes, of which only one was unsuccessful, and also added five successful dribbles and an assist that resulted in the opening goal. Maciej Iwański (Legia Warszawa) played a full game and had 40 ball contacts, of which he lost five and had only 13 reaching forward. He had no successful dribbles and obviously no assists since Poland failed to score.

The consequences are known: Poland definitely will not go to the 2010 World Cup in South Africa and can now set its sights on the home-organised 2012 European championships, for which Poland is already placed as hosting nation and therefore shall only play friendlies until June 2012, apart from its final group match against Slovakia, this Wednesday in Chorzów.