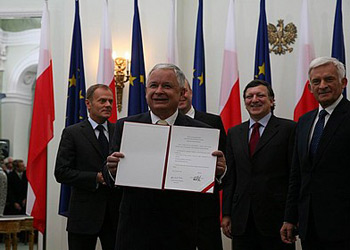 Kaczyński had previously refused to sign the treaty for a year and a half since Poland’s parliament approved it. His main argument was the Irish “No” vote from a referendum in 2008. Ireland recently reversed that vote in its second Lisbon Treaty referendum.

During his speech, Kaczyński said that the new Irish vote “revived” the treaty. He praised the previous Polish government, run by his brother Jarosław Kaczyński, for successfully negotiating on Poland’s behalf within the new treaty. He also stressed the necessity for Europe to keep its doors open to other countries wanting to join the Union. He specifically mentioned Georgia and Ukraine.

EU leaders present at the ceremony praised Poland’s signing of the treaty and thanked Kaczyński, while Donald Tusk criticized the long delay in signing the treaty.

The ceremony also had an interesting moment, as Kaczyński’s pen “refused to sign” the treaty after three attempts. Luckily, another pen was provided and the signing went ahead.

Not everyone was in such a good mood, however. Some members of the Law and Justice (PiS) party want Poland’s Constitutional Tribunal to check if the Lisbon Treaty is allowed by the Polish constitution.

Meanwhile, outside the palace, a few dozen people carried a coffin covered with a flag that read “Poland’s Independence”.

Now, all eyes are on the President of the Czech Republic Vaclav Klaus, the last European leader that has not signed the treaty. He recently said that he now wants an opt-out of the Charter on Fundamental Rights before he signs it.