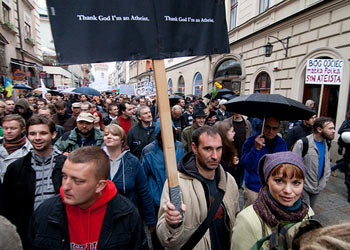 One of the first things visitors to Poland hear is that Poland is a Catholic country. Poles love their Pope, and they love the Catholic Church. But how much of this stereotype actually holds true in Polish society in 2009? One group set out to show that Polish religious life is not as uniform as the guide books report.

The group Młodzi Wolnomyśliciele (unofficially translated as “Young Freethinkers”), in partnership with the Polish Society of Rationalists (Polskie Stowarzyszenie Racjonalistów), were the organisers of the first ever Atheists and Agnostics March (MAiA) not only in Poland, but in all of Europe. The march took place on a rainy afternoon in October – weather that, ironically enough, may have inspired some conversions. Starting at Collegium Novum, the marchers made their way through the Old Town with a surprising lack of protesters, though with plenty of strange looks. The only counter-protest came from a small gathering of about a dozen led by Rafał Trytek, a radical Sedevacantist priest, at the march’s finishing point, the statue of Tadeusz Boy-Żeleński in the Planty. Boy-Żeleński, a famous Polish writer, critic, translator, and enfant terrible of the Polish literary scene in the first half of the 20th century, was also an atheist.

Undoubtedly the biggest question facing the organisers was “Why have a march for atheists and agnostics?” “We want to show that there are nonbelievers living in Poland,” Ewelina Podsiad, the chief organiser of the march, told the Krakow Post. According to the MAiA website, the nontheistic minority needs to be recognised because “in a situation when a minority is not visible, it is easy to discriminate against it, to exclude its interests and rights, especially in the crucial area of legislation”.

I asked Ms. Podsiad how many nontheists actually live in Poland, and she explained that there are no reliable statistics. The official figure is four percent; however, that four percent entails only those people who are either excommunicated or officially leave the Catholic Church and sign a register stating that they are doing so. But many who leave the church simply stop going, and the data on those people have yet to be collected in Poland.

However, to be recognised in official statistics is not the main goal of MAiA; rather, it is to introduce legislation that will curb discrimination of nonbelievers. Ms. Podsiad explained that in Poland, “many people are afraid to admit that they are nonbelievers,” and cited scores of letters she has received from those who “came out” to their families or co-workers and were ostracised afterwards. One of the greatest obstacles facing nontheists is in the Polish school system, she explained. While on paper religious education is no longer mandatory in Polish public schools, children who opt out of religious classes, particularly in schools outside of the major cities, are often ridiculed and teased by their classmates. Similarly, patients in Polish hospitals who decline to receive visits from local clergy may face discrimination from both hospital staff and other patients.

The march’s organisers want to show Polish society that there are nonbelievers amongst them, and argue that the country’s legislation should reflect this. Ms. Podsiad also explained that it’s important for nonbelievers to realise that they are not alone. Around 300 marchers appeared despite the poor weather, with some news reports placing the number as high as 500.

Perhaps the question left to ask is “Why Krakow?” With the exception of Częstochowa, no city is holier for the followers of John Paul II than Krakow. In fact, when the Young Freethinkers were discussing the possibility of covering a tram with their banner, similarly to the London-based “There is probably no God” campaign, religious groups protested only when it was disclosed that the number eight tram would be used; that tram passes by the Curia on ul. Franciszkańska, where John Paul II lived as archbishop of Krakow. However, the decision to host the first march here was a practical one rather than an ideological one: “[Krakow] is where we are based, and it seemed absurd to do this somewhere else,” explained Ms. Podsiad.

The march was also accompanied by a screening of the Czech film Ježíš je normální! (Jesus is Normal!) at the Mikro Cinema, as well as a discussion, which attempted to answer the question, “Can non-believers love their neighbours?”. For more information on the events, please visit the official MAiA website (in Polish).