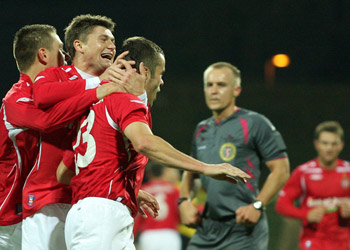 The pattern demonstrated in Polish football during the early days of the 2009/10 season in the Ekstraklasa continues as we go into October. While Wisła remains undefeated, beating Sląsk in Wrocław with a convincing 3-1 win, the competition dropped points once more. The defending champions now have a comfortable six-point lead.

Paweł Brożek managed to put Wisła ahead in Wrocław in the thirtieth minute. Piotr Cwielong and Patryk Małecki tripled the lead to 3-0 in the second half and while Sebastian Dudek managed to put one goal back for the losing home side, it once more demonstrated how dominant the team of Wisła Krakow is in the ongoing season.

Cracovia had a crucial game against Zagłębie Lubin. Cracovia’s Mariusz Sacha opened the score for the home side in the ninth minute and it took Zagłębie two-thirds of the game to produce the equalizer, which also was the end result of the match.

In the battle for second place, Legia Warszawa lost valuable points, suffering defeat by Jagiellonia Białystok (2-0). Because of the win, the home side finally left the last place in the ranking, after having started with a 10-point deficit, as a penalty for a corruption scandal. Polonia Bytom and Lechia Gdańsk could not capitalize on Legia’s mistake, drawing 1-1 against each other. Lech Poznań still struggle with bad form, drawing only 1-1 in Gdynia, against the low-ranked Arka. All in all, Ruch Chorzów was the big winner of the weekend. The 3-1 away win against the troubled Odra Wodzisław meant that the Silesian team moved into second place, behind neighbours Wisła Krakow, who play their home games in Sosnowiec.