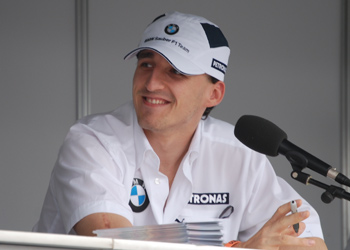 Robert Kubica has just been announced Renault F1’s new lead driver. The Pole from Krakow, who drove his first 55 races for BMW Sauber and managed to win one Grand Prix (Canada 2008) was looking for a new team, after his current employer announced their departure from Formula One. Kubica will be the replacement for Fernando Alonso, who announced two weeks ago that he will be joining Ferrari.

Kubica was a hot item on the F1 transfer market. Toyota was close to a deal with Poland’s one and only Formula One driver and Williams and Brawn GP were also reported as trying to gain the Cracovian’s favour. It is with that perspective that Kubica has chosen the French Formula One team. After having a lot of success with Michael Schumacher in 1994 and 1996 and Fernando Alonso in 2005 and 2006, it went rapidly downhill for Renault. Nelsinho Piquet underperformed and one out of the two wins last year was declared illegal when it was revealed that Piquet deliberately crashed to let Alonso win. It has cost team chief Flavio Briatore his career in F1 and chief engineer Pat Symonds a ban for five years. In addition, Renault had to fight against further race bans three times since 2004 for not respecting safety measures, than they had to fight for race wins. With Kubica as new lead driver, Renault clearly wants to start fresh and leave all of their bad karma in the past.

More and more of the driving seats are being taken. The key lies with the leading team, Brawn GP. The team wants to keep the driver who wins the world championship, but current leader Jenson Button wants his contract improved beyond the financial capabilities of Brawn GP. Also, engine supplier Mercedes wants a German driver, which amplifies the rumours of a driver swap between Rubens Barrichello and Niko Rosberg, although Williams, as a British team, would like to see the return of Jenson Button. Kimi Raikkonen, who was made redundant at Ferrari, is likely to make a move to McLaren, kicking out fellow Fin Heikki Kovalainen, who is rumoured be battling it out with Romain Grosjean over who is to become Robert Kubica’s new teammate at Renault.