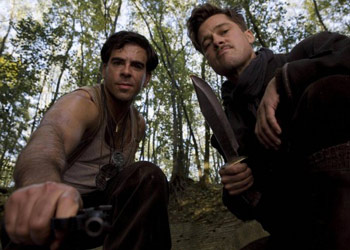 OK, I would like to make this clear from the start – Inglourious Basterds is the greatest movie we’ve seen from Tarantino in years. Now, I’m quite sure that this is not the best way to start a serious movie review. Still, it seems there is no other way around it, given the amount of excitement and satisfaction that I had watching it – without even being a dedicated Tarantino fan to begin with. To be frank, I rarely get this feeling of contentment nowadays – especially when dealing with works that belong to the world of pop culture. The main reason I find this movie unique is the fact that while it utilizes the elements of a popular, low brow narration – so characteristic of Tarantino’s works – it also cares about telling us a superbly constructed story, orchestrated by compelling characters, that also happens to have a deeper meaning. But first things first.

The most obvious reason why this movie stands out is the cast, or rather what the actors bring to the table. Well, for starters – for all of you who thought Inglourious Basterds will be “a Brad Pitt movie”, you may find yourselves surprised. Even though Pitt pulls off an exuberant performance as the leader of the Basterds, the way his character is written (pretty straightforward and with less than expected on-screen time) makes it easy for others to steal the show, especially since the overall quality of acting is top notch and – due to episodic, fragmentary narration – there is no main character as defined by common standards. It’s worth mentioning the convincing performances of Mélanie Laurent (Shosanna Drayfus) and Diane Kruger (Bridget von Hammersmark), both of whom contribute to Tarantino’s pantheon of strong and independent female characters.

However, the one character impossible to forget is that played by relatively unknown Austrian actor Christoph Waltz. His performance as Hans Landa, a Gestapo officer with a rather complex personality, is enough to leave one speechless. The most intriguing aspect of this character is the multitude of references and emotions he invokes. As a member of the Gestapo and an indomitable “Jew hunter”, he is both horrific and intimidating, but at the same time he mesmerises the audience with his aristocratic behaviour and superb intellect.

A similar kind of opposing duality can also be seen in the way most of the film’s scenes are constructed, as they tend to never focus on just one emotion. Many times I found myself amused by some subtle part of the scene, which was initially intended to be dramatic and full of suspense. The presence and clever use of such elements proves Tarantino’s perceptive knowledge of the subjects he deals with.

Indeed, I found Inglourious Basterds to be a very successful and refreshing war movie with surprisingly few war elements in it. Instead, it chooses to focus on intriguing characters and a gripping plot – all to reveal a new approach towards war cinema, replacing plot clichés and character simplicity with realistic motives and artistic quality. So, is it possible to turn back and stick to good old-fashioned war movies after what we saw in Inglourious Basterds? That, I find doubtful.