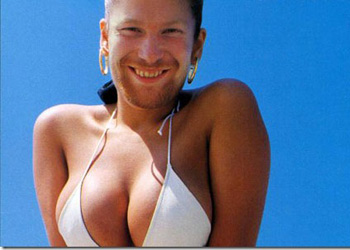 Last month, the Sacrum Profanum Festival invited Aphex Twin, born Richard D. James, to perform over two days in a giant warehouse space in the steelworks of Nowa Huta. The venue was set up with a twelve-channel surround sound system and a complex display of video screens, lights, and lasers. Dana Dramowicz and Anna Spysz look back on their two decidedly different experiences at the legendary artist’s two concerts.

One day in 1994, Richard D. James decided to take an alternative route to DJing – by whizzing a microphone in a blender and dropping the needle on sandpaper instead of vinyl. According to The Face magazine, “People danced enthusiastically, believing the horrible noise to be death metal. The evening ended with James throwing the blender at a man in the crowd, who later asked him to autograph it as a souvenir.” Having released countless recordings, becoming a millionaire in the process, it seems that Aphex Twin’s taste for playing with his audience has never ceased. The big difference now is that the crowd worships him on a near god-like level. And the infinite myths, which are only made worse by James’ contradicting statements in the press, don’t help much either. It’s my strong opinion that Aphex Twin’s Friday concert was nothing but an elaborate prank.

As opening act Hecker finished his DJ set, Aphex Twin hit the stage, which was located on a large platform in the middle of the room. The set started off with such a random series of sounds that I was convinced it was just an extended intro – but no, it continued throughout his entire set. Ambient pads, beats, samples, bleeps, and walls of noise made up the entire concert, and there was not a single recognisable “song”. Sure, once in a while some sort of hardcore jungle or gabba track would rise up in one corner of the room, but the contradicting sounds and noises coming from a different set of speakers created an unlistenable mess. That was one of the main problems with this concert – the idea of twelve surrounding channels in this space was a brilliant one in concept, but failed completely in practice. Most of the time I could only properly hear certain parts of the music, while the others echoed somewhere in the distant corners of the warehouse.

The biggest disappointment for me was that there was nothing at this concert, that for me, sounded anything like his countless recordings. Even his most recent recordings – the Analord series, and his recordings as The Tuss, sound nothing like this concert. They are melodic, sometimes ambient, and acid house-influenced – just like 99 percent of his other material. But then again, I’ve been a big fan of Aphex Twin for the last eight years, but I’m certainly no die-hard Aphex lover. These poor die-hards, who had built up years and years of expectations to hear this living legend live, were then forced to justify the concert to others and declare it “amazing!”. There really is no choice – the disappointment would otherwise be crushing. While reading comments online from these fans, I saw that each and every one had heard moments of their favourite songs in that mess somewhere. And yet each person had heard different songs somehow. This just proves how much active effort these die-hard fans had to put into trying to enjoy the concert.

I guess Aphex Twin must like his Japanese fanbase a little better. A recording available online of his recent performance at Tokyo’s Summer Sonic festival in August 2009 shows that he can sometimes, if he feels like it, perform a crowd-pleasing set. There was even a bit of “Windowlicker” in there. Unfortunately in Poland, it felt just like a repeat of the legendary 1994 performance, and just like that time, excited Polish fans rushed up for an autograph after the concert.

After hearing very unenthusiastic reports from numerous friends who had attended Aphex Twin’s Friday performance, I set out on Saturday ready for anything – except the mind-blowing visual and auditory extravaganza that I witnessed. True, I had heard that the two nights were to be completely different in conception and content. But I had also heard (OK, read) the bitter disappointment in text-message accounts relayed in the late hours of Friday evening, fluctuating between anger and hope, but ultimately resulting in contempt.

And then, turning up on Saturday, the atmosphere already felt different than I expected. People were dancing, for one, and not sitting as I had heard from the night before. And from the moment that Mr. James himself entered the stage (which was properly situated at the end of the warehouse this time), the crowd never stopped moving. Lasers lit up the ceiling and pierced the audience, who had turned up by the thousands from all over the country. This time, they were not disappointed. The visual show was spectacular, but the audio matched it in quality. While it was impossible to actually hear all 12 individual channels, with most of the important parts coming from the main speakers up front, the surround sound was the icing on the already-fulfilling cake.

What had I done to deserve such an amazing experience? Aside from some last-minute scrambling to get through all of Aphex Twin’s library the week before, I had only listened to the man here and there – and, I must admit, I’m a much bigger fan of his ambient recordings than the idiosyncratic techno he’s far better known for. In fact, I had been hoping to witness the calmer of the two performances, but fate had a different plan in store (and fate, it seems, is wiser than I am).