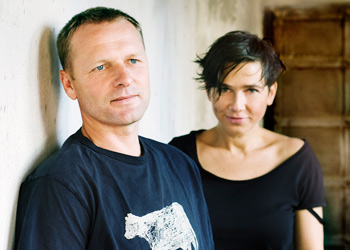 Chiming in with our Photo of the Year competition, the Krakow Post met up with two established names on the Polish scene, Andrzej Kramarz and Weronika Łodzińska. The photographers have worked together for several years now, and their recent exhibition “Home” proved a tremendous success both in Poland and abroad. Together with Łukasz Trzciński, they co-founded the Imago Mundi Foundation, and since 2002 Łodzińska has run Krakow’s Camelot Gallery.

Krakow Post: In Krakow, it seems that even quite seedy bars feel that it would be crude not to host regular photo exhibitions. Besides countless cafes, I once saw an exhibition in a backstreet bakery. Do you think that Krakow is an especially fertile place to be a photographer, or is it a myth that we live in the cultural capital of Poland?

Weronika Łodzińska: I think that from the beginning we were used to the tradition that culture springs from cafes. That was the case with Jama Michalika a hundred years ago on Floriańska street, also the Cafe Literacka, and the Cafe Pod Gruszką and Krzysztofory. These places were connected with literature, painting, poetry and cabaret. And so perhaps it was a natural development that cafes could be a place to show photography. And now it’s come about that if I go, for example, to Pauza for a coffee, I know that there will be a new exhibition, and I’ll go there with a sense of excitement about what will be shown this time. The same goes for places like Baraka and Alchemia in Kazimierz, and I think that this has added a delightful flourish to our city.

Andrzej Kramarz: If we’re talking about photography, I think that it’s a kind of work in progress. When the Month of Photography started in its new form five years ago, not that many people came to the exhibitions. Now, a lot of people are engaging with photography. The Month of Photography has become a major event. We often teach in schools – one can say that there’s a kind of healthy circulation. In relation to this, more and more galleries want to show photography. But I think that until about 2005, it was very hard to show photography anywhere.

KP: This month the Krakow Post is giving an award for amateur photographers. What advice would you give to aspiring artists who want to make a career in photography?

AK: It seems to me that the most important thing is that photography is always about something. I search for stories, and not how to do “the best shot”. That means nothing to me. Photography must be about something. It can even be very direct, or ordinary, so long as as it has something intriguing in it. Something that sets it apart. And it seems to me, a fresh look at something is also very important. That doesn’t mean change for the sake of change. But rather that we are able to look at things that we see every day in a different way.

WŁ: For me, the most important thing is to have courage. If you have a camera in hand, don’t be too preoccupied with changing our way of looking. If there is something before you all of a sudden, have the courage to reach for the camera and just take the picture immediately. Don’t dwell on whether it is worth it or not, or whether someone else might think that it is a stupid idea. It seems to me that this is a difficult barrier, and one that we can be defeated by if we don’t have courage. So first, one should build up a sense of courage, and realise that nothing is idiotic.

KP: You have worked together for several years now. Your ongoing collaboration, “Home”, saw trips to India, the Middle East and elsewhere. Individually, you have worked amongst gypsies, and in the dilapidated turn of the century resorts on the Black Sea. What have been your most inspiring experiences as photographers thus far?

AK: That’s a difficult question, but what is difficult is important. I’ll not manage to say, because, firstly, I’d have to think long about it, and secondly, every day there would be a different reply. We get bored with certain projects, we have moods, and then something crops up which turn outs to be a simple but inspiring direction.

WŁ: The whole project that we worked on together, “Home”, that was, in its entirety, a deeply inspiring event for us. I know that sounds rather banal, or simple. But it’s not so straightforward. Because each of these episodes seemed to open the doors to the next piece. There was the part where we met immigrants in France, there was the time when we met Father Andrzej, who opened his cell. There was the journey to India, where we met people who had decided to die in a certain holy place. And then to Cairo, where we met people who live on a rubbish dump, and yet who were truly beautiful and open. And each time, it was not so much an inspiration as a change in our way of thinking. We must have visited about 40 homes, and each consisted of about 40 long visits. We really got to know these people. It was 40 different histories – some sad, some happy. It was as if we had watched a very long film, or read a very long book. Each time we discovered something that we had never seen in life before – a completely new world.

KP: Which photographers, past or present, do you especially admire?

AK: Well, if we’re talking about photographers who I’ve liked a lot recently, they are very varied. But certainly Mitch Epstein. I also very much like Taryn Simon, a young American photographer – I really adore her work, and this is one of my recent discoveries. I very much like Nan Goldin. However, characteristically, I would prefer to say that I like certain concrete projects. Because sometimes I adore an exhibition, but not a book. For example, I saw an excellent exhibition by Eggleston at the Whitney Museum, and somehow, the book didn’t appeal to me so much. So it varies.

WŁ: It’s too difficult for me. Because at one given moment, I might look at something all the time, and really think that is the best in the world. And then after a while, somehow I leave it, and move on to something else. That said, I’m a great admirer of Martin Parr – his work gives me a lot of happiness. I really rate his wit and detachment.

AK: I must say that amongst Polish photographers, Witkacy is worth a special mention.

KP: Could you tell us about what projects you are planning at the moment, both together and individually?

AK: I’m working on an exhibition called “Kawałek Ziemi” (“A Piece of Land”). It is an exhibition that is devoted to memory, and to something that departs irretrievably. Part of this exhibition is the recordings of witnesses of the tragic events of the Second World War. However, the scope is broader because it also looks at more recent experiences in Bosnia. I will show places which may appear trivial if you don’t know their history. For if we don’t know a place, or if we don’t know a person, it’s very easy to ignore them. The more we know about the history of a place, the more we understand the place, and the less arrogant we are in contact with people or a space. The tragic places are the medium of this exhibition, which intends to talk via them about the meaning of a place. About something that is located beyond photography. Our emotional attitudes towards a place are rather illogical – they are not objective, because they are always personal. Our reception of a place is always very personal, and it always has an emotional charge, regardless of whether it is a sacral space. This is what the exhibition talks about, and it is rooted in the Second World War.

WŁ: I have many weaknesses, and one of my great passions is to travel around Poland discovering faded and sleeping palaces. But only to get to the ballrooms. Because owing to the degradation that occurred to the structures during the time of the last regime, the ballrooms have been transformed into spatial creations that we might find frightening. So these have won my heart.

And one goal I have at the moment is to return to India to find circuses. During the “Home” exhibition I was especially inspired by my encounters with people working in the circus. It’s a theme that’s very much undiscovered and highly alluring. And at the same time absolutely abstract.