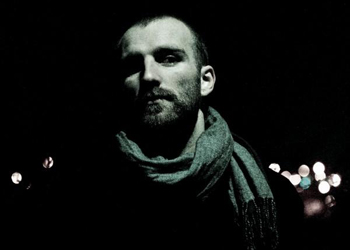 Last year, Ben Frost brought his unique mix of ambient, drone, classical, folk, electronica and noise to Krakow, creating one of the most memorable performances in the Unsound Festival‘s history. He returns this year to perform with his Bedroom Community labelmates Sam Amidon, Nico Muhly, and Valgeir Sigurðsson at Krakow’s Engineering Museum on the 24th. Frost will also launch his newest album By the Throat at Miejsce on the 20th of October.

KP: Your second album on the Bedroom Community imprint, By the Throat, will be released in October of this year. Should we expect something quite different than 2007’s Theory of Machines? Can you tell me about the process of creating By the Throat?

BF: Hindsight tells me By the Throat is a very different record to Theory of Machines. But my approach to music is far too intuitive to really conceptualize truly deliberate differences. I just found myself gravitating back to the piano and a more orchestral palette after the intense guitar orientation of Theory of Machines, which is to say I saw colours and textures in those instruments that I was drawn to – hot reds and deep blacks, glowing yellows. I had to search for them outside of Theory‘s clinical whites and blue. This record is more like the glow from a lava flow, or a burning church.

KP: While in Iceland you formed Bedroom Community with Valgeir Sigurðsson and Nico Muhly. What were you hoping to achieve when you started the label? What is planned for the future of the label?

BF: Bedroom Community was essentially a way of solidifying the ideas the three of us share about music, specifically collaboration, which is very much at the core of our label. We are all very different people with very different ways of creating music, but there are overarching aesthetics that I think glue us together in spite of our differences. We have expanded the label to include one or two new artists, but it’s still very very insular and “family” oriented; the debut album of a young Icelandic Composer Daníel Bjarnason will be out by the end of the year. Daníel is an artist who has been our friend for many years and whose demos we have been listening to since 2003. Things mostly take a long time in Bedroom Community, but we are always very busy.

KP: Those who have witnessed your live performance often describe it as a very physical, or visceral experience. Is this something you have been aiming for specifically from the start?

BF: It is pure self-indulgence for me – physical music is something that I respond to in a profoundly emotional way. I always have; even as a child I would wait around after mass just to play the lowest pedal on the church organ and feel it vibrate the whole space. An audience is not really part of the equation when I perform beyond attempting to present my work in the way I most want to experience it.

KP: This will be your second appearance at Unsound Festival. What were your impressions of the festival last year, and why did you decide to return this year (and with the whole Bedroom Community crew)?

BF: I adore Krakow, Polish people, Polish food, and I very much enjoyed trying to bring the ceiling down in your cathedral. That show at Unsound is definitely one of my most memorable shows. Unsound really is an exemplary festival and I wish there were more like it. As for bringing the whole crew, well, it’s more or less the crew bringing me, I hadn’t dreamed of performing at Unsound twice in a row… if for no other reason than the fact I don’t think anything I do will live up to what I did last year. I think though that my role in the Bedroom Community show will be far more musician than “performer”, which I am very excited about actually. I’m sitting here right now relearning parts for the new Sam Amidon material.

KP: Can you tell me a bit about your planned performance in Krakow? According to the Unsound website, the Whale Watcher’s Tour segment will feature a four-piece band performing all of the Bedroom Community artists’ works. How exactly will that work?

BF: The honest answer is, I’m not exactly sure. Essentially the idea is rooted in our notorious “label night” at the Iceland Airwaves Festival over the last few years where inevitably, the rare occurrence of us all being in the same place at the same time ends up with our stage looking like some kind of bad reunion tour with everyone “helping out” with each others’ work. My music, for example, contains far more performable elements than I am capable of on my own, which is how I am touring and performing most of the time, so this tour if anything is an extension of that idea – I am very excited to be able to “perform” my work a lot more than I usually do.