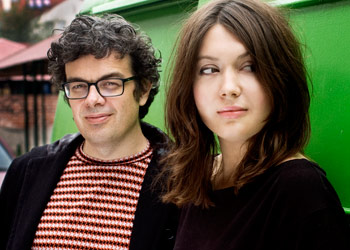 If you could live anywhere in Krakow, where would it be, and why?

Gosia Płysa: I think it would be Kazimierz, where I live now.

Mat Schulz: In Podgórze, with a view onto the river.

If you were crowned queen/king of Krakow, what would be your first move?

GP: I would get rid of the pigeons on the Main Square. I’d pack them all into a van and transport them somewhere!

MS: I would encourage more pigeons to come to Krakow (*laughs*)

What’s one place tourists can’t miss when in Krakow?

GP: Kazimierz, Podgórze, everywhere. I really like the Erdal shoe polish factory that Photomonth took over. We are having an exhibition there as part of Unsound.

MS: The walk up św. Bronisławy to the kopiec (Kościuszki), and around Salwator.

GP: I think it’s the amount of cool places like bars and clubs in Krakow, not all of them are so interesting.

MS: The coffee and cakes are overrated in Krakow.

GP: The cakes are good!

MS: They have these coffee machines in cafes and restaurants and yet no one knows how to make a good coffee with milk. The froth isn’t meant to look like soap suds.

GP: It would have to be Tadeusz Kantor, though he probably wouldn’t appreciate a statue of himself.

MS: A tribute to Kantor, but not necessarily a likeness of Kantor.

GP: In Krakow it’s quite hard, but if I were to go shopping in Krakow it would have to be Galeria Kazimierz.

MS: I used to go shopping quite a lot in tania odzież (second-hand clothes shops), there are some interesting finds there but you need a lot of time. And actually I don’t have any time at the moment, so I haven’t done it in ages.

GP: I usually eat at Momo, and I really like Miejsce. I have a routine: Kolory in the morning, then I take a break to go to Momo to eat.

GP: I like Dym outside in the summer. For food, Trattoria Soprano.

MS: Drukarnia on the other side [of the Wisła] , when they had the old chairs and tables on the pavement… I don’t really like the new ones. I like the kind of old furniture that, for example, Mleczarnia has.

GP: The fact that the rent prices are going up and up every month. It’s really difficult to find something affordable.

MS: It’s a problem less and less, but I definitely don’t like stag parties and men on rugby tours from the United Kingdom…

MS: I lately haven’t had any time to escape for the weekend, but in an ideal world I’d probably go to Berlin.

GP: I wanted to say the same! I would agree, Berlin.

MS: Any direction along the Wisła river, especially from the bottom of Paulińska turning left and walking straight ahead along the river – you can walk a long way. The Planty as well of course.

GP: Actually, I don’t like biking, I hate it. The park in Podgórze is a great place to walk, as well as Salwator.

GP: Pancakes with blueberries is what Poland is missing. With lots of maple syrup and butter!

MS: Occasionally, I’ll have a half-plate of pierogi. Maybe once a year. Why don’t you ask about golonka instead?

GP: Yes, rather the question should be – would you prefer kiełbasa or kaszanka? I’d go with kaszanka!

2 thoughts on “My Life: Mat Schulz and Gosia Płysa”