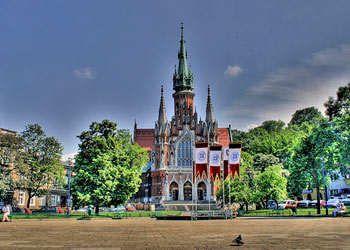 “South of the river! At this time of night?!” It’s a good thing Cracovian taxi drivers are braver than London cabbies or us Podgórzians would never get home after a late one. Yes, there is indeed life after Kazimierz. Just five minutes south of Plac Nowy is the district of Podgórze, founded as an independent township in 1784 by the Austrian Emperor Joseph II, and long remaining independent until its merger with the city of Krakow in 1915.

On entering Podgórze, via either Piłsudskiego Bridge (from Krakowska) or Powstańców Śląskich Bridge (from Starowiślna), you immediately notice the difference. This oldest part, Stare Podgórze, nestles cosily between the river and the wide green stretches of the hill (góra, from which the area takes its name) just a few hundred metres away. It has a very villagey feel, as I thought when I first set foot here, flat hunting, a couple of years ago. Mind you, the district managed pretty well before I came along and Podgórze is, in fact, currently celebrating its 225th birthday, with many varied events such as open-air concerts, street theatre, fireworks and, in late September, the eighth annual “Podgórze Opens Its Doors” event.

It cannot be denied that, to foreign visitors to Krakow, Podgórze is perhaps most well known – infamous – for its wartime history. Both the Jewish Ghetto and Oscar Schindler’s factory (fully renovated as a modern museum and opening in full in November this year) are grim, but necessary, stops on the tourist trail. During World War Two, the Nazis created the ghetto in a small area of Stare Podgórze, forcing thousands of Jews from Krakow and beyond to live for years in squalid conditions, before enacting “The Final Solution” in 1943. Cross Powstańców Śląskich Bridge (from Starowiślna), leave the tram at Plac Bohaterow Getta (“the square of the heroes of the ghetto”) and walk slowly, silently, among straight, orderly lines of cold, oversized metal chairs, which stand as artistic tribute to the murder of thousands and the absence of a culture and community lost to Krakow, and to Poland, forever.

However, the history of Podgórze is, mercifully, long and rich and I, like many foreigners and Cracovians alike, am keen to learn about other aspects of my new neighbourhood. The three-day event “Podgórskie Dni Otwartych Drzwi”, (roughly, “Podgórze Opens Its Doors”), which takes place annually in late September, was the perfect opportunity to stroll around: popping into galleries, dipping into local museums and taking in the area’s many green spaces. Depending on your native tongue, we’re either in the middle of an Indian summer or the beginning of a złota Polska jesień – golden Polish autumn. Either way, a free English-speaking tour guide and a sunny Sunday morning was an opportunity not to be missed.

As good a place as any to start a tour of Podgórze is Rynek Podgórski, which, together with a style of low-rise architecture unique to Krakow, is dominated by the beautiful redbrick Saint Joseph’s Church. Taking my dog for a slow, meandering walk late one night, I estimated the towering structure’s number of bricks at about one and a half million. However, I now believe this figure, like my state of mind at the time, to have been wildly inaccurate.

Being the greenest of Krakow’s 18 official districts, Podgórze is a great place for dog walking. Just above the church is Park Bednarski, a spacious park populated by dog-walkers, lovers, squirrels, birds and giant multi-coloured animals, the latter drawn on the paths by tiny children with massive chalk crayons. Take tram number 3, 8 or 10 to Korona tram stop (just three stops from the Wawel) and you will really feel that you’ve left the city.

But don’t relax for too long. Just around the corner is Lasota Hill, home to a 19th century Austrian fortification and a modern church on the site of the original, which dates back to the 11th century, shortly after the official conversion of Poland to Christianity. From here, you have a fine view of central and northern Krakow. But for one of the most spectacular views of the city, take a 10-minute walk from there to Krak Mound. Kopiec Krakusa, in the Polish, is an earthwork, believed to date from the 7th century and to contain the grave of the legendary founder of Krakow, Prince Krakus. From a short distance, it looks just like a (slightly smaller) Glastonbury Tor: an amazing and beautiful sight for anyone not expecting to see a Celtic-looking construction here in Central Europe. The short climb around its winding path rewards you with a 360-degree panorama of the city: to the north, Stare Miasto and, beyond, the northern suburbs, to the east, the smoking chimneys of Nowa Huta, whilst, away to the south, you may even catch a glimpse of snow on the Tatra Mountains. Not a bad reward for a stroll south of the river…

Selected pieces by John Marshall may be found at at www.krakowjohnradio.blogspot.com.