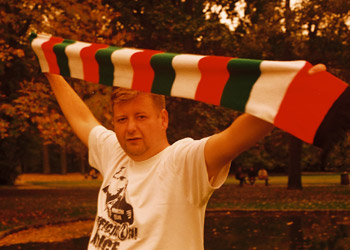 For many years, a specific rivalry has been fanning the flames of animosity between Krakow and Warsaw. Of course, from the native Cracovian perspective, everything that has its roots in the capital seems rather detestable. But the team from Warsaw is considered especially repulsive in the hearts of Krakow’s football fans, regardless of whether their allegiances lie with Cracovia or Wisła. If you ask a local fan about Legia supporters, you should not expect to hear words that you could repeat in front of your grandmother. But the team’s history is not as one-dimensional as some might wish it to appear.

Hardly anyone knows that the birth of Legia is linked to Krakow. As it was, the First World War served as the trigger. During the spring of 1915, many sportsmen found themselves in the ranks of the army and some of them – fighting for the Emperor of Austria – gathered in Marshal Piłsudski’s Polish Legions. During breaks in combat they indulged their passion for football with games against other companies. The players’ intense involvement, coupled with periods of stabilisation on the front, eventually led to the legalisation of the sporting activity. On that basis the club was established in Wołyn (now Ukraine) and their players were recruited mostly from among soldiers from Krakow and Lwów (now Lviv, Ukraine). From the very beginning the team was closely linked to the army. Their initial name was “drużyna Legjonowa” (The Legion Team), which led some historians to mistakenly claim that the name referred to the Legions of the Roman Empire, who, when fighting in England, brought with them a game called “harpastum” – a prototype of soccer.

The July push of the Russian army made the Legions move west until they reached Warsaw. From that moment the history of the club became tightly connected to Warsaw, even though not a single player from the capital was on the team at this stage. Surprisingly, in their début against a team from Krakow, Legia won, beating Cracovia 2-1, thus becoming the unofficially-recognised Polish Champions. After the Legions were dismissed in the autumn of 1917, the Legion soldiers dispersed all over the country and the team’s fate hung in the doldrums. Not long afterwards, it was reactivated, only to be put on ice again a couple of months later because of the Red Army aggression on Polish territory. Once again the young lads from the Legia club had to grab weapons and fight for freedom.

However, ultimately, a love for football prevailed, and when peace came the team was reactivated in 1922.

The mid-20s saw a new recruitment policy implemented, and for that simple reason the team became so unpopular all over the country. The army officials decided that all of the young, promising players serving in the army in other parts of the country should be recruited and play in the ranks of Legia.

At the outset of the 1930s the decision to reconstruct and change the club into a soldiers’ lodge marked the beginning of a serious crisis between the military officials and the players, and soon afterwards Legia entered a state of gradual decline, before being relegated from the top division for the first and last time ever. In 1939 the club fell into a desperate plight and was on the verge of extinction. Ironically, there are many indications that the war saved it from a final collapse. The war also spared the stadium, which was only partially destroyed in the 1944 Warsaw Uprising.

After the war, Legia shared its dreadful lot with the entire country. The club was brought back on track but old managers were pushed aside and former Red Army generals were appointed to the president’s post. During the next two decades, the club was governed by the very people who had fought against an independent Poland. On 19 August 1956, Legia achieved the greatest victory in its league game history. The game was against Wisła Krakow and the “white stars” were demolished 12–0. That season also saw the club’s first league cup title, the elusive League Championship, and was considered the military club’s best ever until 1994. But the shameful truth is that the way to glory was paved by political decisions concerning the forceful transfer of top players from other leading clubs. Thanks to the new batch, including Kazimierz Deyna – undoubtedly the most famous Polish football player – the team was rebuilt entirely.

Legia played the most significant match in its history on 3 March 1982, hosting the team from Soviet Georgia – Dynamo Tbilisi. Not long before that, martial law had been introduced and the atmosphere had become extremely tense. Several thousand soldiers and militias armed with clubs and machine guns were mobilised for the event. In order to prevent riots, the troops gathered in the actual stadium. Nevertheless, the match transformed from a sporting event into a manifesto against the Soviet Union. Many fans were beaten by the militia while singing the national anthem and shouting anti-Soviet slogans.

Indeed, the military character of the team from Warsaw appeared to be the best asset and made a profound impact on the team. Thanks to this privilege, the team from the capital had the power not only to “steal” the best players from other teams but also, unfortunately, to be seen as a formation that collaborated with the occupant – the Communist Party. The irony is that the club was established by people fighting against communist invaders. Eventually, Legia became the most recognizable Polish brand among soccer teams.

In 1991 the team entered the semi-final of the European Cup Winners’ Cup, but were defeated finally by Manchester United. But the 1-1 draw at Old Trafford speaks volumes.

The team, with its long and eventful history, has remained one of the strongest in the Top Division for the past 60 years and it remains a force to be reckoned with in the struggle for the Polish championship, letting its supporters feel the thrill of the chase for new trophies. Despite the end of their military tradition, Legia fans continue to meet with a lot of hatred in almost every part of Poland – especially in Krakow. Even though every world-class team is worthy of support, I wouldn’t recommend a stroll along the Market Square with a Legia Warszawa scarf.

To get a better sense of what it’s like to be a Legia fan today, I interviewed three current supporters of the club: Bartek, Janusz and Marcin.

KP: Why do you support Legia and not Polonia [the rival Warsaw team]?

B: My father was always a Legia fan. Besides, the atmosphere during Legia matches was so engaging that I couldn’t resist it.

KP: And what about the atmosphere in Polonia’s stadium? Was it more lifeless?

B: Exactly! I tell you, the difference was cosmic. Legia’s stands were always full of life and the Polonia team is supported mainly by the retired and pensioners.

KP: I remember my grandfather was a Polonia fan.

B: And probably he was the youngest there [laughs].

J: At that time Polonia was a very weak team and there was a small bunch of people supporting them.

B: But the point is that they didn’t have any tradition of supporting their team. Legia has always ruled in Warsaw.

KP: What does it mean for you to be a Legia fan?

B: Well, it means to defend the good name of the club, to defend the colours and the emblem. If anybody curses our club our task is to react and keep him down.

KP: Do you have respect for other Polish clubs?

J: Some, but not all of them. We don’t have any respect for Krakow teams. For one reason only: they are playing a dangerous game. If we use fists they shouldn’t use knives – then it is not a game anymore. If you are punched your face won’t break, but if you are stabbed it can be worse, can’t it?

KP: Unfortunately, this happens from time to time in Krakow.

J: This is the only place in Poland where these things happen.

KP: Do you think the Polish police keep people safe in the stadiums?

J: I’ll get a heart attack from laughing.

M: Hold on. There were some cases when the police saved our asses.

J: Yes they did. When Bartek was shot with a rubber bullet for example.

B: Really cool. I had a hole in my side. [laughs] The bullet stopped in my pocket. I still have it in a box as a souvenir.

KP: But do you remember any moments when the police were taunting you?

B: Every other match away.

J: Have you ever been beaten because of the Polish anthem?

J: 1982. Match against Dynamo Tbilisi. We started to sing the anthem and bang-bang. We were not allowed even to utter a word during the match.

KP: Do you remember the movie Football Poker, which documented the shady business of fixing matches and general corruption? Do you think it is still accurate?

J: Come on. Everything is still the same.

B: Only the names are different from those in the movie.

KP: Do you think this will change?

J: This can be changed when the old people give up. And this is impossible because…

KP: There is too much money involved.

B: When I was watching the transmission of the election of a new president of the PZPN [Polish Association of Soccer], I saw only old, bald, toothless louts. They have always been there. There was not a single young man in the chamber.

KP: Can you tell us any stories about your trips away?

B: I remember a funeral procession and amongst the people walking we spotted a Widzew Łódź fan wearing the scarf of Widzew, which is our deadliest enemy. The whole ceremony was demolished immediately. Everyone ran away.

M: The lad with the scarf was very fast. We couldn’t catch him.

B: And the deceased was lucky that the coffin wasn’t decorated with the club colours. [laughs]

There was another funny situation when we went for an away match to Częstochowa. We took our seats on the stand and finally, a little impatiently, I asked a guy next to me when were they going to start. The answer was: “They are not riding yet”. It turned out that we were waiting for a motorbike race. We didn’t want to watch it so we kicked up a row.

J: These were wonderful times. Legia was great.

KP: Is it different now?

B: Well, times have changed…

KP: Would you like to greet the Krakow teams’ fans?