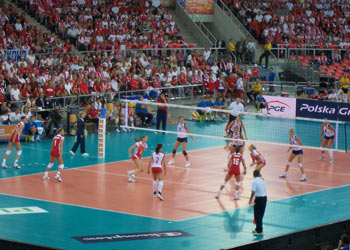 After the men seized the European volleyball title, the same is now being attempted by the ladies. But the mountain between the Polish team and European victory is a high and steep one, and ironically, it lies in the Low Countries. The second round stages were already secured, but The Netherlands humiliated Poland with 3:0 (25-23, 25-13, 25-18), a result that could still count in the second round stages, as first round results still bear weight later in the tournament.

This state of affairs made the first second round match against Belgium absolutely vital. But amidst the confrontations against Holland and Belgium, a crisis emerged between current coach Jerzy Matlak and former coach Andrzej Niemczyk. The latter accused Matlak of poor, passive coaching that has no hope of securing European trophies, something Niemczyk managed to achieve twice. But the tension worked well on the players. With occasional frustration yet good spirit, Poland defeated the Belgian ladies with 3:1 (25-12, 25-19, 21-25, 25-16). Games against Russia (30 September) and Bulgaria (1 October) will prove to be decisive.

Another nice contrast in highs and lows could be found in the world of cycling. Within one week the last grand tour, the Vuelta d’España, was decided, as well as the world championships. In both events, Sylwester Szmyd proved to be Poland’s best cyclist. In the Tour of Spain, Szmyd came in 17th, 21 minutes behind winner Alejandro Valverde. His performance in the Spanish mountains of the Sierra Nevada was very convincing. The tour was robbed of its excitement when the dastardly Dutchman Robert Gesink, who was second in the overall standings, fell off his bike and had to ride three more stages with severe injuries. Needless to say, Gesink dropped far behind Valverde, who took the victory to Madrid fairly easily.

Valverde was also a favourite to seize the world championship on the hilly track in Mendrisio, Switzerland. Main rival was home rider Fabian Cancellara, who already took the rainbow jersey in the world championship time trial. But while the main favourites were looking at one another going up and down the steep Swiss hills, the Australian diesel that usually never attacks broke away with a dashing escape. It would prove to be enough for Cadel Evans, who finally managed to win a big race. Sylwester Szmyd came in 24th, trailing by two minutes and 50 seconds.

In Formula One, the main talk is no longer about the world championship anymore. Yet another scandal marked a new low in Formula One. Renault deliberately made Nelsinho Piquet crash in the 2008 Singapore Grand Prix, making it possible for teammate Fernando Alonso to win the race later on. It cost Renault both their team managers, of which the flamboyant Italian Flavio Briatore even received a life ban, as well as their two main sponsors, including ING Bank, and a two-year suspension should it occur again in the next two seasons. Alonso is tired of all the politics and is to sign a five-year deal at Ferrari; he will replace Kimi Raikkonen, who most probably will return to his former team McLaren.

In this years’ Singapore Grand Prix, the main focus was on racing and the championship again. Lewis Hamilton won the race, leading with his McLaren from start to finish. Timo Glock finished surprisingly well in second and Alonso celebrated a personal high after all of the turmoil surrounding his team, scoring his first podium of the season. Because Ferrari played no role and both Sebastian Vettel and Mark Webber had setbacks while in second place, the Brawn GPs of Jenson Button and Rubens Barrichello came in fourth and fifth, expanding their lead in the world championship with only three races to go. Robert Kubica fought for his one point, putting his total at nine points, entering 14th place in the world championship.