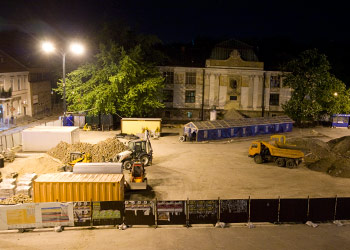 At dozens of sites across Krakow all signs of progress seem to have come to a halt. And when I say “dozens” I mean a few. Some excitingly modern and trendy developments due to breathe excitingly modern and trendy life into Krakow over the past year have completely failed to materialize. According to my calendar I should, by now, be able to flit effortlessly across the Vistula on a hyper cool pedestrian-cycle bridge, sun myself on an ersatz beach by the river, swing around the brand new Szczepański Square and then pop into a super-deluxe multiplex on Karmelicka Street. Such an excessive expenditure of energy in one day may well have represented a serious risk to my health, but I would have welcomed the opportunity to risk it.

I assume we have the global downturn thingy and its idiot-banker masterminds to thank for the massive toothy gap on Karmelicka Street. I was looking forward to having a multiplex on my doorstep, but all there is now is an overgrown hole in the city. At the moment the site looks like an ideal safe harbour for the resettlement of a dozen endangered Amazonian tribes. I swear I saw a bear in there the other day.

Down by the river, progress is equally glacier-like. The much-anticipated “beach” is more Normandy landings than St. Tropez. So far the developers have succeeded in making that particular stretch of the riverbank look even more godforsaken and ugly than it was before. I had high hopes for the new Podgórze bridge when giant corkscrew machines moved in earlier in the year, but it seems they failed to uncork whatever the problem was. For months the bridgeheads have been swathed in flapping blue plastic and nothing more seems to have been done. Of the second promised bridge there is no sign at all.

The redeveloped Szczepański Square, tantalizingly described as “Krakow’s ante-room”, has also managed to become a slightly worse eyesore than it was before. What was an ugly, litter-strewn car park has now become an ugly, litter-strewn hole in the ground with a fence around it. Presumably there are some tremendously important bits of pottery and monks to be dug up, cleaned and then reburied for another 400 years in a museum basement. I’m confident we have enough monks around to be getting on with, without digging up dead ones as well.

In April of last year I was there as Prince Charles was proudly shown the start of renovation work on the Sukiennice. That was 17 months ago. So far all we seem to have to show for it is an unsightly yellow crane hunched over the building and an annoying inability walk from west to east through the middle of it. In the intervening time the miraculously swift and skilled road-resurfacing people have replaced and levelled every single stone on half a dozen city-centre streets. I’m thinking all future renovation and development projects should be handed over to these guys.